Harriet Beecher Stowe was a small, quiet woman who wielded a towering, thunderous literary voice that helped change the conscience and course of a nation. 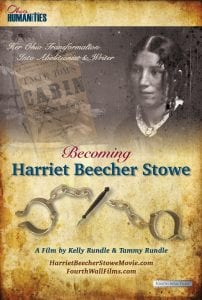 A half-hour companion documentary, “Becoming Harriet Beecher Stowe,” premiered last February on WQPT-PBS, and will be presented online by the Bettendorf Public Library on Thursday, Feb. 18 at 2 p.m., in honor of Black History Month.

A Q&A with the film producers and Christina Hartlieb (executive director of the Harriet Beecher Stowe House in Cincinnati, Ohio) will follow the film via Fourth Wall Films’ Facebook page at www.facebook.com/Fourth-Wall-Films-173844695995934.

Becoming Harriet Beecher Stowe tells the little-known story of the famous writer’s life in Cincinnati, and how those life-changing experiences contributed to her best-selling novel “Uncle Tom’s Cabin” (1852). Stowe lived in Cincinnati between 1832 and 1850, and just after her move to Maine, she adapted her moving observations and anti-slavery sentiment into America’s most influential novel.