Casting is critical when a show has a weak script, and that’s the case in Circa ’21’s latest show, “Clue,” which is thoroughly entertaining due to its cast elevating material that could’ve clunked in other hands.

Basing an entire musical on a board game was a risky proposition from the start (pun intended), and the writers had to have a clue (ditto) that it was going to be difficult to stretch out the plotline of a narrative gaming experience into a complete two-act show without going a lot deeper on the plot. 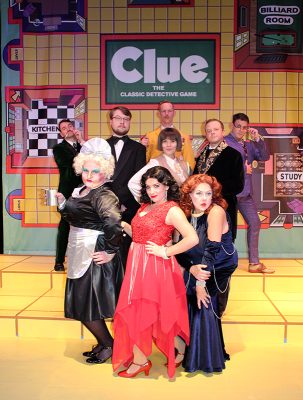 Unfortunately, the script for “Clue” is hit-and-miss in that regard. Most of the storyline is fairly superficial, and the biggest opportunity for a rousingly fun ending is blown by a tagged on denouement which completely squanders the momentum of the show and one of its most fun interactive elements. Without getting into too much detail and completely spoiling it, the show should’ve ended, in effect, at the same time the game typically does, because that was a fun and clever element of the script in hearkening back to its original material.
In general, that was one of my biggest problems with the script, is that it lacks the imagination to break the fourth wall and incorporate the crowd more. After all, in a show based upon a board game, why not get everyone involved? That’s one of the most fun things about playing a board game, that interaction. There are some moments, again, made better by the energy of the cast in interacting with the audience, but in general I thought the script should’ve included more of them.
Now, with all that out of the way about how the script doesn’t fully work, I have to recommend the show and say that I found it to be very entertaining. Why? Because of the terrific and very entertaining cast, and the way that cast does interact with the audience during those moments it breaks that fourth wall. 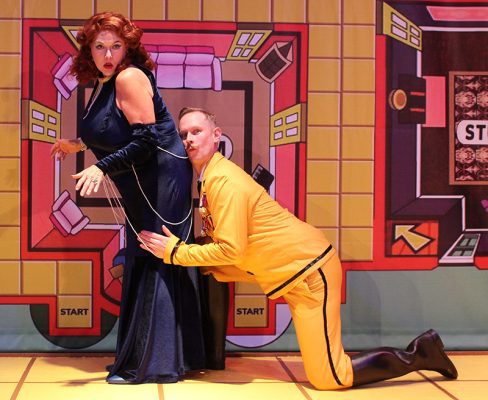 The cast of the show, in particular, star Tristan Tapscott, is particularly great in that regard. Tapscott is a consummate performer, and unapologetic ham when it comes to interacting with an audience. That’s exactly what’s needed here in the role of the narrator, Mr. Boddy (body, as in dead body, get it? Ohh, my side!), who transcends life and death to bring life to the show with his wit and energy. Tapscott elevates the material with a wonderfully loose and improvisational style, which gives it a lot more energy and life, and makes it a whole lot more fun than its script would probably be in other hands. 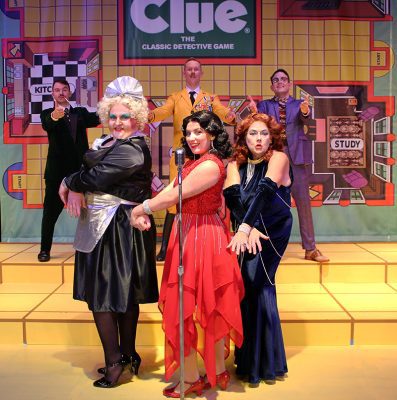 The rest of the cast has their moments as well. Sydney Dexter gamely plays the detective, who’s ostensibly the straight person in the production in the midst of all the weirdos.
Olivia Bleak is a sultry and steamy Miss Scarlett, Jonathan Chisolm drags laughs out of the saucy Mrs. White, Kyle DeFauw is a smarmy and scheming Mr. Green, Sam Forgie is pompous fun as Professor Plum, Regina Harbour shows off colorful comedic chops as Mrs. Peacock, John Pickup is blustery and bold as Colonel Mustard, and Emmett Boedeker is slyly suspicious as the piano player.
The fun you’ll have with each of these talented comedic actors is more than worth the cost of admission, and with Tapscott leading the way with his jibes and asides to the audience, you’re going to have a fun time at “Clue.” Give it a try before it closes Nov. 5; call (309) 786-7733, ext. 2.