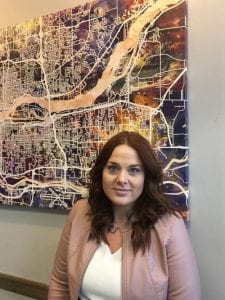 Jen Dobrunz with a map of the Quad-Cities.

EXCLUSIVE: The beloved former president/CEO of Ascentra Credit Union, Dale Owen, died in November 2020 at 52, but his wide-ranging generosity and large legacy will live on in a new fund established by the Quad Cities Cultural Trust. 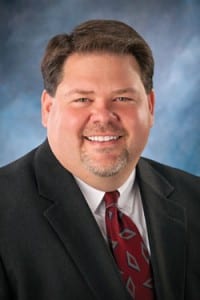 It will match every $1 given up to $500,000 to support art and culture programs in the Quad-Cities through QCCT. The collaboration created by Owen among the financial institutions is unprecedented, trust executive director Jen Dobrunz said Monday.

“It was organic for him to just really focus on the lending community and give them an opportunity to all come together,” she said, noting Owen had become one of three QCCT board chairs (or “tri-chair”) just in January 2020.

He was asked by outgoing tri-chair John Anderson, CEO at Quad City Bank & Trust, who was to leave the board.

Owen’s initial goal from the Q-C financial community was to raise $250,000 and later leverage those dollars as a public match, to turn it into $500,000 or $1 million, Dobrunz said 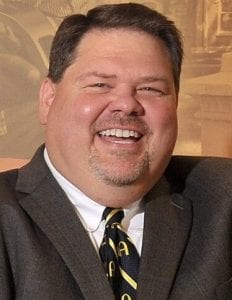 Dale Owen, one of three QCCT board chairs for just 10 months, led a campaign to raise $500,000 from Q-C financial institutions.

“Covid hit and he was like, we’re just gonna have Zoom dates,” she said. “He got hit with that personal news, and I will never forget that phone call when he was calling to tell me his world had been shaken, but through it all, he kept reiterating how important it was to him to fulfill this project.”

She learned by June that Owen was diagnosed with pancreatic cancer (which took his life just five months later). Anderson had been a tri-chair since 2018. Owen was a personal donor to QCCT and Ascentra was a corporate donor.

“I can’t even put it into words, just what it was like to watch – to watch him stay engaged, be notifying me when he was the strongest in between his treatments,” Dobrunz said, noting Owen asked Anderson to step back in and help make donor calls.

“I really kept praying he would get to finish it personally, overcome and all that,” she said of Owen. “He was an incredible person.”

“I couldn’t think of anyone better to step into the role than Dale Owen. Anyone that knew Dale knew he was a visionary and servant leader, always leading by example,” Anderson said. “He was also my friend. I cared deeply for the work QCCT was doing and wanted it in the hands of someone who would also have that same level of passion.” 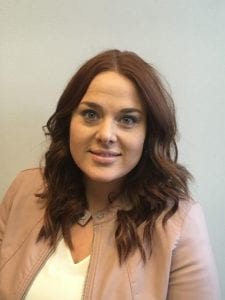 A Rock Island native and Augustana College alum, Owen became tri-chair – in the midst of an ambitious trust fundraising campaign ($12 million by the end of 2021, boosting the endowment to over $32 million) – with Ruhl & Ruhl President Chris Beason and retired executive Linda Bowers.

Founded in 2007 by its three trustors — The Bechtel Trusts; the Hubbell-Waterman Foundation; and the John Deere Foundation – the QCCT had never publicly solicited funds before.

Owen’s desire to bring the community together in this way led to the “Culture Matters Here Community Banking Project.” When Covid hit the community, he didn’t waver, Dobrunz said. “In fact, he was more convinced than ever of this idea. He saw the local banking sector working together like never before.

“If the banking and lending sector could come together for art and culture like they did for PPP loans and other Covid relief, we could revive our economy by reviving one of the biggest economic drivers: art and culture,” she said.

“That’s what’s so cool about this – the lending community, these are competitors,” Dobrunz said. “They have partnered in an amazing way during Covid – exchanging notes about PPP and SBA loans.”

“I just feel like this community lending united project that Dale put together was just a subset of that,” she said. “They were already having new collaborative conversations in 2020 that they weren’t having before and now they had an opportunity to come together, and invest in an economic driver that is going to awaken our community and help us be the tourism destination, the cool place for the creative people that 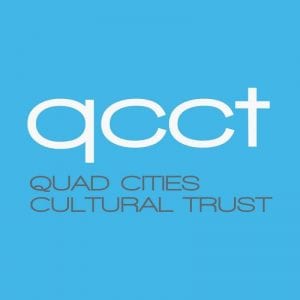 Quad Cities Cultural Trust was founded in 2007 with investments by The Bechtel Trusts, Hubbell-Waterman Foundation and John Deere Foundation.

According to Owen’s letter to his fellow tri-chairs, following his cancer diagnosis:

“When I accepted the position as Tri-Chair for QCCT, I was excited to meet with you in person and tell you all the reasons I was thrilled to take on this role. I was going to tell you about my personal passion for art and culture and the incredible economic driver it is in our community.

“I was going to share with you the personal outlet it is for so many students in Scott and Rock Island County. I was going to tell you that the mission and vision of the Quad Cities Cultural Trust align so well with our belief system at Ascentra.

“I cannot in good conscience forfeit the impact I know we can still have if we come together. It would bring me such excitement to know that although my world has changed, that I was still able to take this project to the finish line with your help,” Owen wrote.

Working to fulfill his goal 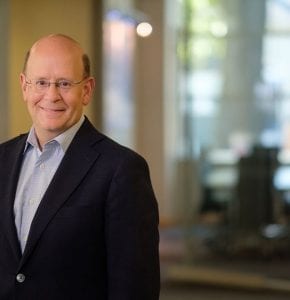 The big 2020 push came after an historic 2019, when the trust distributed more than $1.1 million — a 21% increase from the year prior. It typically makes grants in the spring, and funding for each partner varies each year, based on detailed applications.

The QCCT had been an anomaly because it was a privately-funded entity until 2019, when it formally launched its first public campaign, Dobrunz (executive director since August 2019) said. They didn’t have corporate partners in the past for fundraising.

“Dale laid the groundwork; he created the playbook,” she said. “John fulfilled that playbook.”

By this past fall, local lending and banking institutions had committed $500,000 collectively, as part of the total campaign. 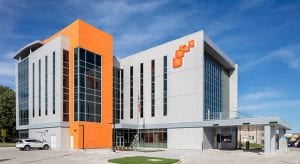 The half-million-dollar milestone was bittersweet as Owen passed away at 52 on Nov. 14, 2020.

“I know that this Community Banking Project was successful because of Dale,” Anderson said. “I’m glad he got to see the momentum he created before we lost him. He has truly left a legacy with this and we will feel its benefit for years to come.”

“It was a heartbreaking moment, when within a few days – we reached the milestone and then Dale passed away,” Dobrunz said. “We were so excited and we wanted to celebrate with him, and we were heartbroken that we weren’t able to do it the way we wanted to. The minute that happened, our tri-chairs, our board started talking about – how can we honor this man?

“He did all of it; he told us exactly what we needed to do and how to do all of it,” she said of Owen. “Without him, it wouldn’t have been possible. This is the only thing we could think of that would be a fraction of what he deserved, for his contribution to our community, to art and culture in our community and to the Cultural Trust.”

Matt McCombs, CEO of Vibrant Credit Union, shared his thoughts: “Vibrant is honored to help carry on Dale’s legacy and vision for the unified support of the Quad-Cities’ arts and cultural advancement. We are proud to step up alongside other local financial institutions to help Dale’s commitment to our region and our community’s health live on.”

Q-C invited to meet the match

Anderson remains as interim tri-chair on the QCCT board, as the role has meant a lot to him, and Owen was the only one he felt could replace him, she said. 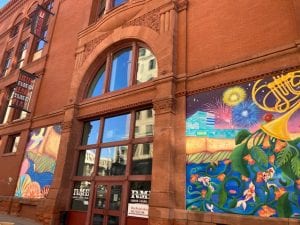 The Quad City Arts mural (led by Sarah Robb) on the Main Street side of River Music Experience, funded by a QCCT donor.

Other Q-C financial institutions will be invited to donate to QCCT for the fund, as well as the public.

There’s no deadline for matching gifts to be made, and she thinks they’ll hit $1 million pretty quickly, partly due to Owen’s stellar reputation. 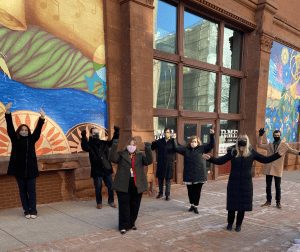 “It’s a great way to excite the public about art and culture, and the need to financially support it,” Dobrunz said.

Owen (who was Ascentra chief executive since 2013) wore so many hats, that being QCCT tri-chair was just one, she said. 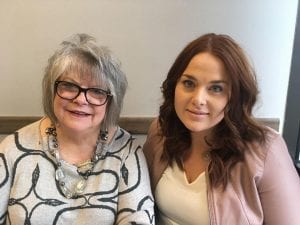 Owen was also involved as a volunteer for Children’s Miracle Network, Junior Achievement, United Way of the Quad Cities, Boys & Girls Club, Habitat for Humanity, and Bethany for Children and Families.

He was at the helm of Ascentra for the construction of a new $10-million, 40,000-square-foot headquarters at 2019 Grant St., Bettendorf, which opened in August 2019. Ascentra has over 39,000 members in Iowa and Illinois.

Those left to cherish his memory include his wife, Angela Owen, Rock Island; children, Nick, Megan, Allison, Kyia, and Duston (Lani) and their children, Emily and Peyton.

“Dale was an advocate for credit unions and was dedicated to improving the financial lives of others. He exemplified the credit union philosophy of people helping people in his very own kind and caring way. He loved his credit union — a love that transcended to our staff, our members, and the communities we serve. Each and every day Dale put others first, was the eternal optimist, and was a positive influence on the lives of many.

“Dale served in many aspects of our communities. His reach was far and wide. He was always ready to provide assistance or make valued connections so our communities could continue to thrive. Dale’s involvement also encompassed many non-profit organizations in our area.

He encouraged all of us to be of service to others, get involved, and to pay it forward.”

Dobrunz and the leaders of the QCCT funded partners met last month at RME (at 2nd and Main streets, Davenport) to celebrate exceeding the campaign goal and completion of a new mural created to frame the Main Street entrance of the historic building.

The colorful mural – led by artist Sarah Robb and Quad City Arts’ Metro Arts program – aimed to visually represent all the QCCT partners. It was made possible by an anonymous donor to the trust.

For the 2021 grant cycle, the QCCT will accept applications in April and announce funding in May.

With the increased support, the six funded partners may receive more money than most years, Dobrunz said.

“Ultimately, it’s at the pleasure of the board, and they’ll always be responsible with our portfolio,” she said. “I would anticipate this is a great time to reach milestones like this, so we can invest as much as we can into our partners.” 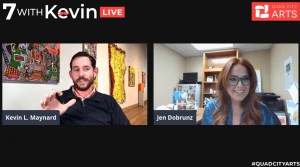 “This is a great way for the individual Quad Citizen, for locally owned, for-profit organizations to lift each other up by lifting up art and culture,” Dobrunz said. “Because it’s in our school system, it’s an economic driver; it’s the fabric that creates the vibrancy in our community.”

“What’s exciting to me is to have this match fund, to have all these generous participants agree to acknowledge him and honor him with it,” she said of Owen. “Our culture matters here and it always will. We won’t always have the Dale Owen fund connected to it – but what he created, what he did, is creating impact today and creating funding forever.”

For more information on the trust, visit qcct.org.