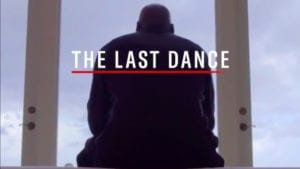 Michael Jordan is one of the most celebrated figures in popular culture and is almost universally regarded as the greatest basketball player of all time. In a career filled with too many accolades to list, MJ dominated the ’90s, leading the Chicago Bulls to six championships. The only years the team didn’t win it all during this incredible run, were when Jordan was either retired or trying his hand at minor league baseball.

In 1997-1998, Jordan’s final season with the Bulls, an NBA Entertainment crew followed the team, capturing never-before-seen footage. ESPN has partnered with director Jason Hehir (“The Fab Five,” “Andre the Giant”) to use this footage to create a new documentary miniseries called “The Last Dance.”

In addition to the footage collected in the 1997-1998 season, the documentary will include new interviews featuring various people involved with the team. The trailer features appearances by Scottie Pippen, Steve Kerr, Phil Jackson, Dennis Rodman, and a modern-day Michael Jordan paired with a comically large cigar.

“The Last Dance” will unfold across 10 episodes over five weeks. Two episodes will air every Sunday at 8 p.m. starting this Sunday Apr 19, with the final installments dropping on May 17.

The series will be aired live on ESPN in the United States through various cable and satellite packages that carry the network. International viewers can watch the show on Netflix the day after each episode airs on ESPN. If you want to watch live without a traditional cable subscription, you can stream “The Last Dance” using live TV streaming services with access to ESPN, including Hulu + Live TV, Sling TV, AT&T TV, and Youtube TV.