‘Elf On The Shelf’ Coming To Davenport’s Adler Theatre 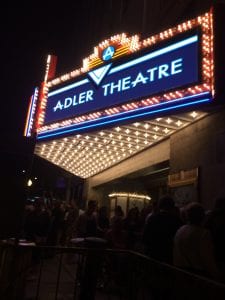 everywhere. Inspired by the beloved box set The Elf on the Shelf®: A Christmas Tradition, this touring stage production is a thrilling spectacle of music and dance that transports audiences to the North Pole to glimpse the magical lives of Santa’s Scout Elves.

This toe-tapping tale tells the story of one particularly impressive Scout Elf who must help his new, human family remember the importance of Christmas cheer. Can this tiny elf, along with a host of North Pole pals, make Christmas joyous for his family once again? Featuring an original story and score, dazzling sets and costumes, and heartfelt moments that will bring the family together, this joyous and uplifting celebration will leave audiences captivated by the splendor of the season.

THE ELF ON THE SHELF: A CHRISTMAS MUSICAL is a creative collaboration between The Lumistella Company and Mills Entertainment.  The original stage production was developed by Sara Wordsworth (Broadway’s In Transit, Disney’s Frozen JR., Disney Cruise Line’s Frozen, Beauty and the Beast, and Aladdin) as writer and lyricist, Russ Kaplan (Broadway’s In Transit, Dear Albert Einstein) as composer, and Sam Scalamoni (Elf the Musical, Disney’s Beauty and the Beast, Nickelodeon’s StoryTime Live) as director.

Sean Leary
Sean Leary is an author, director, artist, musician, producer and entrepreneur who has been writing professionally since debuting at age 11 in the pages of the Comics Buyers Guide. An honors graduate of the University of Southern California masters program, he has written over 50 books including the best-sellers The Arimathean, Every Number is Lucky to Someone and We Are All Characters.
See More Articles From Sean Leary
Advertisement
Tagged: Adler TheatreDavenportELF ON THE SHELF