The harrowing story of the only American woman to be executed by direct orders of Adolf Hitler will return to Davenport’s German American Heritage Center this Saturday.

The 2011 documentary “Wisconsin’s Nazi Resistance: The Mildred Fish Harnack Story,” will be shown at 2 p.m. at the center, at 2nd and Gaines streets. The one-hour doc takes a provocative look at a Milwaukee-born, University of Wisconsin-Madison graduate who became the only American woman ever executed on the direct order of Hitler for her involvement in the Berlin resistance movement during World War II. 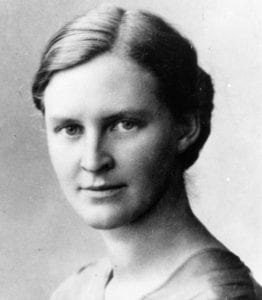 The GAHC displayed a special exhibit on Fish-Harnack (1902-1943) in the fall of 2013. That September, the documentary’s filmmaker — Joel Waldinger, producer at Wisconsin Public Television (WPT) – appeared in the Quad-Cities to discuss his five-year quest to chronicle the brave woman’s extraordinary life.

The award-winning film was shown twice at the Bettendorf High School Performing Arts Center. Waldinger introduced the film and answered questions after the showings. He also led a teachers’ workshop on the film Sept. 7, 2013 at the German American Heritage Center in Davenport.

She and Arvid had moved to Germany in 1929, where she taught and also worked on her doctorate while he worked for the German government. In 1930, she moved from Giessen to Berlin to be with her husband, and to study at the University of Berlin on a fellowship from the Alexander von Humboldt Foundation.

Mildred worked as an assistant lecturer (English and American literature and language) and a translator. She was also involved with the American Student Association, the American Women’s Club and Berlin chapter of the Daughters of the American Revolution.

During this time, Fish-Harnack became interested in the Soviet Union, where women could choose where to work and also had other rights that women in the U.S. did not have, according to womeninwisconsin.org.

During the rise of Hitler and the Nazi regime in the ‘30s, Fish-Harnack and her husband joined a small resistance group, which the Nazi secret police — or Gestapo — would later call the Red Orchestra. The group smuggled important secrets about the Nazis to the U.S. and Soviet governments and helped Jews escape from Germany. Their espionage cost them their lives.

Arvid was sentenced to death for high treason and espionage, according to a University of Wisconsin-Madison website. He was executed in December of 1942, hung using a foot-long rope. It was a method Nazis refined to prolong the victim’s agony, the site said.

“It can be assumed that I am widowed,” Mildred said. “I haven’t however received an official letter informing me of the death of my husband, who was supposed to be executed.”

Arvid died believing that Mildred would serve her prison sentence, not knowing she’d face the guillotine.

On Feb. 16, 1943, she was strapped to a bench and guillotined. The Nazis noted it took Mildred seven seconds to die.

The CIA investigated surviving members of the resistance as Communist spies. Mildred’s name and story were mostly forgotten. In 1947, UW–Madison recognized Mildred in its Alumni Magazine.

“But as the Cold War heated up, a move to honor Mildred was halted, because her pro-Communist sympathies could not be ruled out,” according to the WPT documentary. “Wisconsin senator Joe McCarthy and his hunt for Communists may have been a factor. So instead of honoring Mildred, the university’s inquiry triggered an FBI investigation.”

Mildred and Arvid were written off as communists. Gradually, the true story emerged as documents and family members fought to clear their names, according to UW.

In 1986, Mildred Fish-Harnack Day was established in Wisconsin. It takes place every year on her birthday, Sept. 16th.

Mildred’s life and legacy is recognized at UW-Madison through the Mildred Fish-Harnack Human Rights and Democracy Lecture, an event held each academic year to promote greater understanding of human rights and democracy, and enrich international studies.

Saturday’s film screening at GAHC is included with general admission: $5 for adults, $4 for seniors, $3 for children and free for members. For more information, visit gahc.org.