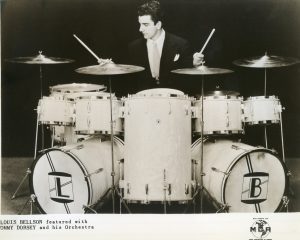 Louie Bellson, who grew up in Moline, pictured with his patented dual bass-drum set, around 1947 (in his early 20s).

Tuesday, July 6th would have been legendary jazz drummer Louie Bellson’s 97th birthday. Davenport drummer Josh Duffee will perform a snare drum solo on his Bellson Model Remo Snare Drum to celebrate his birthday, next to Bellson’s grave at Riverside Cemetery in Moline.

Duffee will broadcast a Facebook Live video feed from his Facebook page, and will be at Bellson’s grave the exact time he was born  (Luigi Paulino Alfredo Francesco Antonio Balassoni) — 3:15 p.m. — in Rock Falls, Ill., July 6, 1924.

“This event will allow fans of his from around the world the chance to help celebrate his special day,” Duffee (a longtime Bellson champion and student) said. “I try to perform by his grave each year for his birthday and the day he passed away. I performed there last year in the morning before the heat of the day came around.” 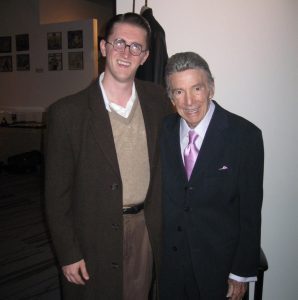 Josh Duffee, who also graduated from Moline High, met Bellson many times over the years, including here in October 2008 at River Music Experience, Davenport.

On February 14, 2009, Bellson died at age 84 from complications of a broken hip suffered in December 2008 and Parkinson’s disease, and is buried next to his father at Riverside Cemetery, 3400 5th Ave., Moline.

Duffee has rescheduled a special 20th-anniversary concert salute to Gene Krupa (since it was rained out June 29), to the same location — Lincoln Park in Rock Island, at 7 p.m. Tuesday, July 27th.

On June 30, 2001, the Josh Duffee Orchestra performed a Krupa tribute at the then-Moline Community Center on 5th Avenue, less than two blocks away from where Bellson’s family operated a music store at 1711 5th Ave. Then a 21-year-old Moline High graduate, Duffee intimately knew his way around a drum kit and worshipped both Gene Krupa (1909-1973) and Louie Bellson (1924-2009) – the latter a Moline alum who in 1941, at 17, won the Gene Krupa National Slingerland Drum Contest in New York City, out of whopping 40,000 drummers. 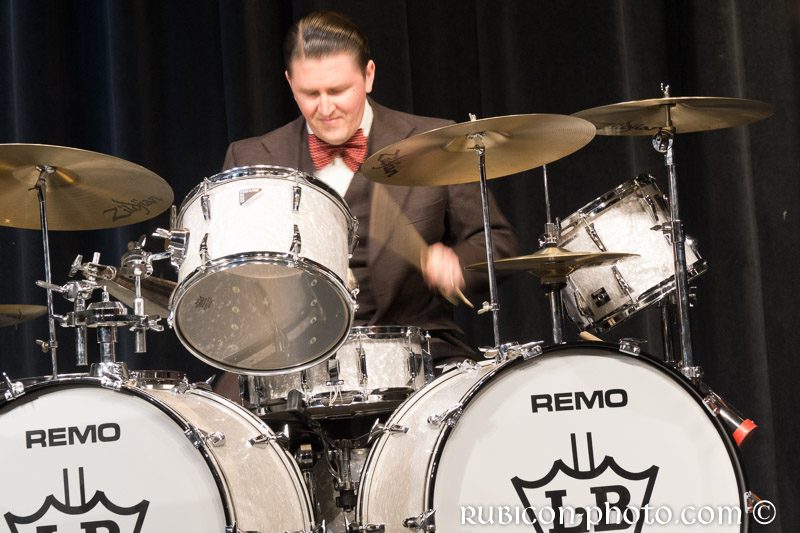 Duffee performing on one of Bellson’s old drum kits.