For over three decades, the music department of First Presbyterian Church in Davenport has presented free large-scale Christmas concerts featuring several of its choirs plus orchestra. Like everything else, this year is different.

Due to the Covid-19 pandemic, the 2020 concert will take place virtually. The concert — featuring solo and small group performances from 39 of FPC’s adult and youth choir members — will be available on Facebook from the “Music at First Pres” page starting with a watch party on Saturday, Dec. 19 at 7:30 p.m. The pre-recorded concert will stay on Facebook at least a few weeks after that. 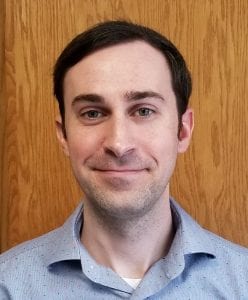 Matt Bishop is director of music at First Presbyterian Church.

All contributions to the concert were recorded under strict Covid mitigation protocols in an effort to keep staff, volunteers, and audience safe, church music director Matt Bishop said. The concert includes a socially distanced musical offering by the Vesper Bells, a solo performance by principal organist Alex Gilson, and a rebroadcast of a Christmas anthem recorded by the acclaimed 80-voice Sanctuary Choir in 2019.

That anthem is the Mack Wilberg arrangement of “Joy to the World,” Bishop said Tuesday, noting it was used on WQAD-TV.As always, the new Christmas concert features a variety of traditional carol and hymn arrangements, from many of the church’s dedicated vocal and instrumental musicians, Bishop said.

Last year, First Pres had over 100 people on stage for the two concerts, on a Saturday night and Sunday afternoon, he said.

This year, the largest group to record for the video was the 12-member Vesper Bells, which was masked the whole time, playing handbells eight feet apart, Bishop said. “They were there for 45 minutes, very carefully orchestrated to be as safe as possible.”

Other performances include vocal solos and duets, plus instrumental combinations including harp and flute, string trio, woodwind trio, and piano solos.

The Sanctuary Choir halted in-person worship in mid-March, Bishop said, and only reunited outside at LeClaire Park for a few times in the 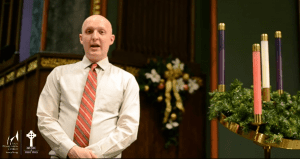 “We didn’t really have a goal of some performance, but just to sing together again,” Bishop said. “Everyone was separated by seven feet, had these singer’s masks. It was about 50 people, once every other week.”

“It was terrific,” he said of coming back to sing as a choir. “It’s hard to sing under those conditions, spread far out. But just having the choir be together, watching them be together, and 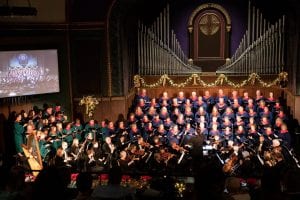 An image from the 2019 Christmas concert at First Presbyterian Church, Davenport.

sing together for the first time in six months, it was a beautiful experience.”

Like many churches, First Pres has been pre-recording services from the church at 1702 Iowa St., with others contributing readings or music from home, to stream online, without choir, Bishop said. Last Sunday was the first time they did an actual livestream of a service, he said.