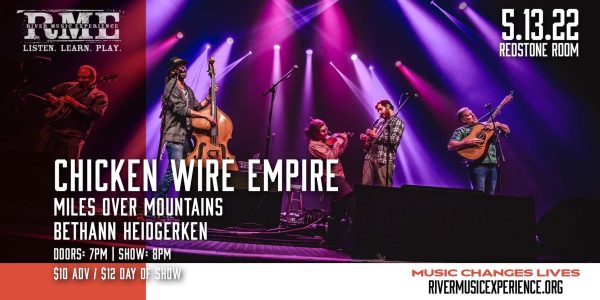 Age Restriction: 19+ (minors must be accompanied by parent or guardian)

All tickets are general admission.

Purchasing a ticket does not guarantee a seat.

Born from the Wisconsin jamband scene, Chicken Wire Empire began as a traditional bluegrass band. The band honed its traditional sound in 2014 with their debut album Chicken Wire Empire. With half of the group rooted in bluegrass, and the other half steeped in jamband music, a change occurred when CWE performed an Old & In The Way tribute show. A new sound was found in Milwaukee, and Chicken Wire Empire joined the roster of high energy jamgrass happening across the nation. This journey from traditional to progressive was documented by director Ross Monagle in the film ”All It Takes,” premiering in 2016 at the Oriental Theatre in Milwaukee. Recorded and mixed by sound engineer Sam Donoghue, the film follows the band around Wisconsin and includes performances in Milwaukee’s historic Riverside Theatre. In 2018, the band returned to the studio, recording their sophomore album “What Moves Mountains” at Axis Recording Studios with engineer Vinny Millevolte and the mastering talents of Justin Perkins. With support from their family and friends, What Moves Mountains was released January 1st of 2019.

“The new Chicken Wire Empire record is a technically proficient, well-crafted mixture of modern original songwriting and time earned classics. They seem to have taken on some wonderfully exciting elements of modern progressive bluegrass while also retaining their original character, born of their greater Milwaukee town roots.” – Adam Greuel of Horseshoes & Hand Grenades

In November of 2019, Chicken Wire Empire toured Germany, Austria, and Switzerland as part of the 9th annual Bluegrass Jamboree, hosted by Rainier Zellner. While the band fell in love with Christmas markets, the European audiences were enamored with the CWE sound. Arriving back in America, the band sifted through recordings of all 24 shows. With the help of their engineer Daniel Machnik, the tour was encapsulated in two live 2021 releases, ”Live from Deutschland Vol. 1 & 2.”

“The new Chicken Wire Empire live recordings rock! What a great show they put on! The flow of the recordings makes one feel like you are sitting in the audience in the auditorium for the live performance. I especially enjoyed their unique take on some of the traditional songs found in the bluegrass repertoire – made them truly sound like their own. The somewhat non-traditional grass tracks are what might be considered “progressive traditional” bluegrass, where they stretch out a bit while keeping the traditional feel. I thoroughly enjoyed these “funkytrad” recordings by Chicken Wire Empire!” – Greg Cahill (Special Consensus)

In 2020, as live shows were drying up, the band turned to live-streaming, and were featured showcase artists in virtual renditions of the IBMA and Folk Alliance International conferences. The band used their time to arrange and record an album with Minnesota songsmith Chris Castino (The Big Wu) at NeonBrown with Ryan Young (Trampled by Turtles) engineering. The album features guests Peter Rowan, Sam Bush, Jerry Douglas, Andy Hall, Tim O’Brien, and Nick Forester. Entitled “Fresh Pickles,” it was released in February 2022.

​​”Fresh Pickles aims to satisfy your cravings and is just the beginning of Castino’s heartfelt and fulfilling voyage into bluegrass. Always true to the tradition and authentic in presentation, Fresh Pickles is packed with great music.” – (Gratefulweb.com)

Chicken Wire Empire has been blessed to share the stage with renowned musicians Yonder Mountain String Band, 30db, The Big Wu, Peter Rowan, The Travelin’ McCourys, Horseshoes & Hand Grenades, and more. With love from their local scene, friends, and families, Chicken Wire Empire looks to the future, with a goal to strengthen Wisconsin’s bluegrass scene, and further the appreciation of acoustic music.

Hailing from McHenry, IL Miles Over Mountains plays a modernized style of progressive bluegrass covering a wide spectrum of genres, dynamics, and feeling. Their live catalogue draws from their studio albums “Five Star Heart Breaker” (2015), “Ballads & Burners” (2017), and “Work Harder Not Smarter” (2020).  The band has been performing, touring, and making records since early 2014 playing an average of 150+ shows per year throughout the Midwest region and beyond. The band looks with excitement and hungry ambition towards the 2021 tour season, coming to a town near you!

The group features Phil Hoffman (upright bass), Caleb Peters (guitar), Sean Shiel (mandolin) and the more recently welcomed addition of Pete Smith (banjo) in 2021. Collectively the members of the group have thousands of shows under their belt, giving their songs, sound, and performances a musical maturity that echoes their collective years of passion and experience.

Bethann Heidgerken is a born and raised Iowa musician. She started out her musical pursuits in Dubuque, IA and was performing professionally in bands by age 15. She received her bachelor’s of the arts at the University of Iowa in Iowa City and spent her college years pursuing her music as a singer-songwriter as well as performing in local Iowa City bands. She currently lives in Davenport, IA with her family. Her musical influences include Gillian Welch, Susan Tedeschi, Bonnie Raitt, Dessa and The Avett Brothers. 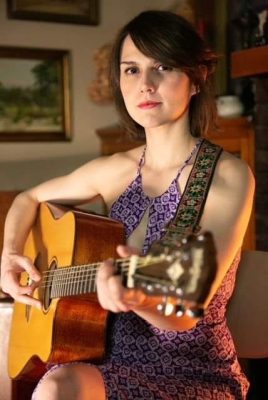 All tickets for RME events are sold via Eventbrite and carry applicable transaction fees. Tickets can be purchased the day of event online and at the door (subject to availability). Ticket fees also still apply for admission at the door.

The Redstone Room at River Music Experience is a standing room only concert venue. All tickets are General Admission unless otherwise stated. For the comfort of our guests, a limited amount of seating is available on a first come first serve basis.

Reserved Tables: a limited number of tables are for sale in advance, sold through our ticketing service. You will need to add both your General Admission tickets AND your Reserved Tables to the cart for purchase. There are four seats to a table.

Physical Accommodations: If you require seating or a reserved space due to health or physical needs, you will need to purchase your General Admission ticket first, and then email feedback@rivermusicexperience.org to reserve up to 2 seats. Tables must be purchased separately.

Most shows in the Redstone Room are 19+, unless otherwise noted, but minors may attend if accompanied by a parent or guardian.

Purchased tickets are nonrefundable, except in cases of rescheduled or cancelled shows.

Sean Leary
Sean Leary is an author, director, artist, musician, producer and entrepreneur who has been writing professionally since debuting at age 11 in the pages of the Comics Buyers Guide. An honors graduate of the University of Southern California masters program, he has written over 50 books including the best-sellers The Arimathean, Every Number is Lucky to Someone and We Are All Characters.
See More Articles From Sean Leary
Advertisement
Tagged: chicken wire experienceRiver Music ExperienceRME