The Illinois Quad City Civic Center Authority announced that the venue at 1201 River Drive would be given the new moniker of the Vibrant Arena at The Mark, named for the local credit union which is its new sponsor, and The Mark, which was its original name.

The Vibrant Arena at The Mark was originally opened in 1993 as The Mark of the Quad Cities (and to be honest, a good number of people around the Quad-Cities still, and always have, referred to it as The Mark). The facility became known as the TaxSlayer Center in October 2017 as part of a 10-year, $3.3 million deal. Prior to that, iWireless held the title sponsorship for 12 years.

I guess my suggestion for the TK Books/Venus Video And Exotic Lingerie Shop Center didn’t get through committee. Oh well, maybe next time! 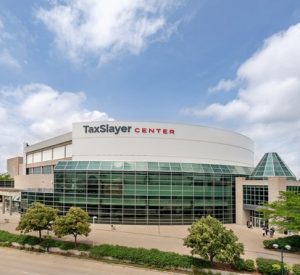 The Vibrant Arena at The Mark is at 1201 River Drive, Moline.