BREAKING NEWS: With Gov. JB Pritzker’s covid restrictions still in place despite the virus’ numbers going down, the number of counterfeit covid-19 vaccination cards has increased in Illinois, and with that, the number of crackdowns on those cards. 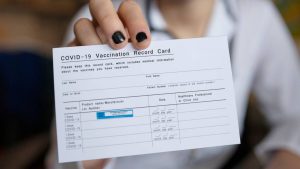 This week, an increasing number of counterfeit covid-19 vaccination cards in a shipment from China were seized by Chicago officials at O’Hare International Airport.

Almost 50 of the counterfeit cards were taken, marking the second time in the past three weeks that a number of cards of that magnitude has been seized.

The packages containing the fake vaccination data were falsely labeled as containing greeting cards. Upon inspection, officials found 21 counterfeit covid-19 vaccination cards in one parcel and 20 fake cards in the other, according to the official release.

The cards have been increasingly used by people in professions where proof of vaccination is required to maintain employment, according to officials.

Despite the increase in counterfeit cards coming through, Illinois covid numbers have been slowly improving over the past couple of weeks.

Covid numbers statewide continued to show improvement over the month of September, as the positivity rate for last week, Sept. 27-Oct. 3, dropped to 2.7 percent statewide.

The Illinois Department of Public Health reported 18,735 new COVID-19 cases in the past week, along with 236 additional deaths and over 159,000 new vaccine doses administered. That marks a total of 1,630,864 cases of coronavirus reported statewide since the pandemic began, and 25,017 confirmed COVID fatalities statewide. As of Sunday night, 1,687 patients in Illinois were reported to be in the hospital with COVID-19. Of those, 412 patients were in the ICU and 234 patients with COVID-19 were on ventilators.

Despite the better numbers, Gov. JB Pritzker has maintained all mask mandates and restrictions in the state.

When asked for potential numbers which could lift the mask restriction, Pritzker pointed to the metrics in June and last reopened fully. Illinois had dipped to a positivity rate of 1.3 percent; over the past week the rate was at 2.7 percent, down considerably from previous months.

In addition, according to the IDPH, almost 65 percent of Illinois residents 12-and-older have been fully vaccinated, another metric which is up considerably from previous months.

Still, Pritzker remained adamant against moving too quickly to take away the mitigations, noting that they were working to reduce the numbers.

Sean Leary
Sean Leary is an author, director, artist, musician, producer and entrepreneur who has been writing professionally since debuting at age 11 in the pages of the Comics Buyers Guide. An honors graduate of the University of Southern California masters program, he has written over 50 books including the best-sellers The Arimathean, Every Number is Lucky to Someone and We Are All Characters.
See More Articles From Sean Leary
Advertisement
Tagged: #illinois covidcounterfeit covid cards from chinaillinois covid-19 numbersillinois covid-19 restrictionsillinois cracking down on counterfeit covid vaccination cardsJB Pritzker