It’s been two years since Bettendorf High School staged its last musical. A year after it was forced to cancel the planned “Shrek,” on Thursday 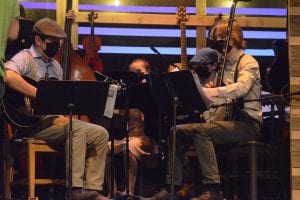 night (April 15) it opens the Quad-Cities premiere of “Bright Star,” a musical by Steve Martin and Edie Brickell.

The show will be performed in person, with limited capacity at the BHS Performing Arts Center, 3333 18th St., and it will be livestreamed online — 7 p.m. Thursday, Friday and Saturday, and 1 p.m. Sunday. All tickets must be purchased at bhspac.booktix.com, $10 for the in-person show and $20 per device for online.

With a cast of 25 and 11 instrumentalists (including musical director and BHS staff member Chris Saito), “Bright Star” tells a beautiful story of love and redemption inspired by a real event, says BHS director Katie Howard. The story centers around newspaper editor Alice Murphy and her journey from the 1920s to the 1940s and illuminates the impact one moment can have on the rest of our lives.

The music is as much a part of the story as the dialogue, Howard said recently. As such, the instrumentalists (who all wear face masks) 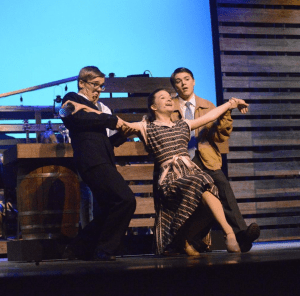 perform on stage with the actors (who will not be masked) throughout the entire show, which is unique and not seen in many productions. The music is unconventional in the world of musical theater, as it features bluegrass.

“This show is so different from anything that we’ve done here at the high school, different than anything I’ve done in my 20 years as an educator,” Howard said. “While the story is set in the 1920s and 1940s, it mirrors some of the social issues that we face today among the beautiful bluegrass music that I love.”

“Bright Star” – which premiered on Broadway in 2016 — is set in post-World War II North Carolina in the Blue Ridge Mountains, with flashbacks to 1923. The story focuses on Alice Murphy (played by Hannah Wilson), an editor at the Asheville Southern Journal and the story she will tell.

In that story, Billy Cane (Tyler Koch) has returned from the war a year earlier to see his father, Daddy Cane (Jack Cockayne), and childhood friend Margo (Havyn Fish) and learns that his mother has died.

Billy wants to become a writer, so he ventures to the Southern Journal office and meets Daryl (Nathan Hutcheson) and Lucy (Jordyn

The logo for “Bright Star,” which opens Thursday night at Bettendorf High.

Mitchell), who do nothing to encourage him, before he is introduced to Alice.

The last theatrical production BHS did was the straight play, “Rehearsal for Murder,” in fall 2019, and the last musical was “Wizard of Oz” in spring 2019. They planned to do “Shrek” last year, which was canceled a week before it was to open, after having been in rehearsals about eight weeks.

“They wanted to be back on stage and get a sense of normalcy,” Howard said Tuesday of her students. They decided not to re-do “Shrek” this spring, partly because the students who played the title role and Lord Farquaad graduated last year. 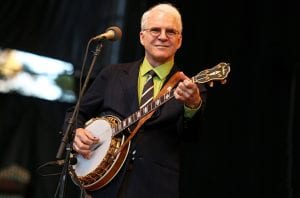 Steve Martin is a longtime banjo player who has performed many years with the bluegrass band Steep Canyon Rangers.

“It would be hard for students who graduated to see someone step into their role, so I thought we’d get a fresh start and do something completely different,” she said, noting she saw “Bright Star” done at the International Thespian Festival at University of Nebraska in June 2018.

“I just felt like it was a really powerful performance; it’s so different than your typical musical theater piece,” Howard said. “I felt like we had the talent for it this year.”

The cast has rehearsed all in mask up until Monday, April 12, which was the first time they took them off on stage. Anytime an actor leaves the stage, they have to put their mask back on and there’s hand sanitizer right there, Howard said.

She blocked the show with more space between students than usual, with some dance and other scenes where being close was unavoidable. The instrumentalists are very close together on stage, and they all wear masks while playing. 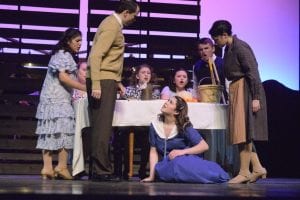 The show will be livestreamed, so ticketholders have to watch it at the same time it’s performed. In the 841-seat theater, anytime someone buys a seat or a group, it puts an empty seat on either side, Howard said.

Steve Martin – who’s an accomplished banjo player in addition to a writer, actor and comedian – and Edie Brickell (the singer/songwriter most famous for her hit “What I Am”) penned the musical based on the flavor of their Grammy-winning collaboration on the 2013 bluegrass album “Love Has Come For You.”

The partnered on the “Bright Star” music; he wrote the book and she the lyrics. It had its world premiere at the Old Globe Theatre in San Diego in September 2014; opened at the Kennedy Center in Washington, D.C. in December 2015. 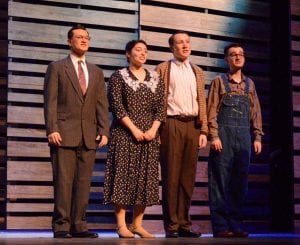 The musical closed on Broadway June 26, 2016 after 30 previews and 109 regular performances.

A New York Times review of its Broadway debut said:

“It’s not just the unusual flavor of its music that makes ‘Bright Star’ something of an outlier on Broadway. The musical is gentle-spirited, not gaudy, and moves with an easygoing grace where others prance and strut. And it tells a sentiment-spritzed story — of lives torn apart and made whole again…”

A Hollywood Reporter review said the show’s story – about a “lost infant, an encounter many years later between strangers unaware of their deep connection, a conveniently timed discovery and a rapturous happy ending, complete with matching betrothals — are so fanciful that only Shakespeare could have gotten away with them.

“Still, there’s a disarming sweetness and sincerity to this folksy Americana bluegrass musical, created by Steve Martin and Edie Brickell, which makes the tuneful melodrama a pleasurable experience,” the review said.

BHS senior Havyn Fish, who plays Margo, has done theater since freshman year, pretty much every show. She was playing co-lead Fiona in 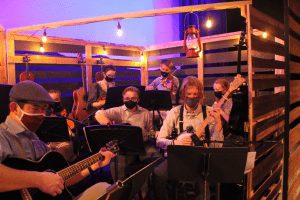 “The safety of everyone was more important than the show that we were doing,” Fish said Tuesday of canceling that popular show. “I had a good time in the rehearsals, I’m glad I made those memories and I kind of just moved on from there.”

In “Bright Star,” Margo owns a bookshop, is about 20 in the story, and wants to be seen as a woman. She has a crush on Billy, and shows her struggle with him not really noticing her.

“I’ve had a lot of fun with this show – it’s different than anything I’ve ever done,” Fish said. “It’s 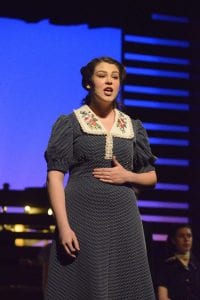 “I think it’s the most I’ve ever learned through a show,” she said. “I’ve learned more from this show than any I’ve ever done. Because it’s so different. I think we all kind of jumped in and let’s make this a really good show. It’s been so long since we’ve been able to do a real show, let’s make it count. And it’s been really fun.”

In the Covid era, what was it like performing without masks?

“It’s probably making a few people nervous. For me, I’m all right with it. I’ve had my first dose of the vaccine already,” Fish said. “I’m OK with it. We’re all being really careful backstage – keeping our masks on, unless we’re on stage, or ready to go on.” She knows a lot of her friends have gotten their first vaccine dose (available to any Iowa or Illinois resident age 16 and up).

Fish is happy the show will be online, since she’s inviting students she knows will go to Drake University with her, and others outside the area. She plans to major in music education at Drake. 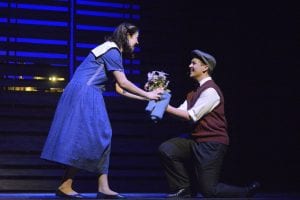 Hannah Wilson as Alice and Topher Elliott as Jimmy Ray.

When they took off masks for the first time Monday, it made a huge difference, Fish said.

“It felt so cool to hear everybody and be able to see everybody’s face,” she said. With masks, “It’s a lot harder to breathe, especially if you’re dancing,” she said.

Senior Hannah Wilson, who plays Alice, another lead, said “Bright Star” is about the hardships of Alice’s life, what she goes through and how she overcomes each challenge.

In 1923, Alice is a young teenager, a troublemaker who wants to rebel. In the ‘40s, she’s a mature woman, with a job. “The difference between the two is very fun to play with,” Wilson said.

For “Shrek,” she was Gingerbread Man. Wilson has enjoyed “Bright Star” more, because “it’s so different from what we normally do at Bettendorf,” she said. 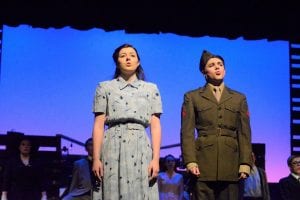 “Also, being a small cast and we haven’t done a theater production in so long, we’ve taken more time to really dig into the show and I find myself having a lot of conversations with other cast members, simply talking about trying to get into the minds of the characters to really make the scenes come to life.”

It’s also great to have this as a Q-C premiere, she said.

“It’s awesome; it is so cool,” Wilson said. “I actually was with Ms. Howard when we saw ‘Bright Star’ at International. Just seeing that show come to life, being in love with it since freshman year, it’s been great to be part of it.”

“The difference in music, the different subject matter,” she said of her affection for the show. 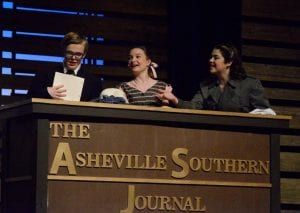 Nathan Hutcheson, Jordyn Mitchell and Hannah Wilke in a scene from “Bright Star.”

“You go through a lot of emotions when you’re seeing it. You’ll laugh, you’ll cry. It’s just a very intriguing show.”

His freshman year, he learned the bassoon for “The Sound of Music,” and has played banjo for two and a half years. Goerdt was on stage in “Rehearsal for Murder” and “Shrek” (including as a rat tapper).

Steve Martin is a banjo virtuoso himself, performing since 2009 with the Steep Canyon Rangers.

Playing so close together – “It’s not that much different than playing in a pit – where we usually have twice as many people but twice as much space,” Goerdt said. “It is very nice to have gone through performing online with my fellow band members to being in person next to them and hearing all the sounds interacting together.”

Howard is really looking forward to sharing “Bright Star” with the community. “The kids have worked so hard,” she said.

All audience members at BHS will be required to wear masks. Please note that actors will not be masked and concessions will be limited. To reserve tickets, visit https://bhspac.booktix.com/.