Logo for Sunday’s Ballet on the Lawn.

The 2 p.m. and 6 p.m. shows, at 2109 Brady St., will be on a temporary stage on the lawn at the 125-year-old, member–owned, private club. Audience members should bring their own chairs and blankets – there will be plenty of room to spread out on the lawn. Tickets will not be sold on site, but should be purchased for $20 at balletquadcities.com.

“They’ve been very easy to work with,” Joedy Cook, the company executive director, said of their debut at The Outing Club. “It’s a beautiful place, and they’re very excited to have our ballet company. There’s plenty of space.”

Company member Nicholas Bartolotti, in his second season with BQC, said there will be something for everyone in the fun, informal program. 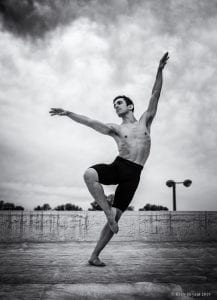 “The show we’re putting together is kind of a mixed rep show, it’s got a little bit of everything. We’ve got some classical pieces; we’ve got some musical theater pieces. It’s even got some tap in there. Some of these dances are old favorites that we’re bringing back and others are brand new.”

“There’s about eight of us performing in the show,” Bartolotti said. “We’ve been utilizing our space so a lot of our pieces don’t involve the entire company. Sometimes, just two of us, or three of us, or solos. So we have a lot of space to be able to space out amongst each other. When we are rehearsing pieces that require the whole company, often times we’ll go outside and rehearse on one of the lawns across the street, at one of the churches.

“If we are all inside, taking classes together, where we’re a little more on top of each other, we are wearing masks,” he said.

Due to Covid-19 concerns, the dancers limit the amount of touching they do during performance. Bartolotti said they’re experimenting with new ways to partner with each other, without physically touching each other. “It’s like this limitation we’re putting on ourselves to see how creative we can get.”

They’re leaving it up to audience members to wear face masks, and the dancers won’t be wearing masks.

He said outdoor performances are less formal, and “a different sort of fun in a way. You’re not blinded by the stage lights, so you can really see your audience’s faces better, and play off of them.”

Caroline Cady, who will be performing, has danced “Ballet Under the Stars” at Lincoln Park, Rock Island, for over 10 years. Outdoor performances are a lot of fun, she said. 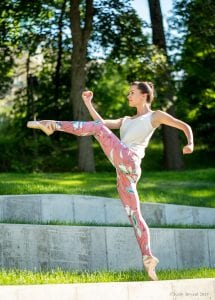 “The audience is definitely a lot closer to us. It feels more personable to us, than being on stage with a huge audience. You can make eye contact with people; you can recognize audience members. It’s really a fun experience.”

Cady, a 19-year-old Rock Island High School graduate, has been dancing with Ballet Quad Cities since she was 3. She was in New York City two months last year to dance with the American Musical and Dramatic Academy, but unfortunately got a stress fracture while she was there and had to come back home.

“It’s been super fun to be back at the studio again, and I’ve been able to teach and perform, so it’s great.”

Cady will be a guest with the company this season, and has been a trainee in the past. She is attending Loyola University, Chicago, remotely.

“It’s just a really nice outlet. I feel like life can be pretty stressful, so coming into the studio and just being able to let go and focus on something very specific, and putting your own artistic spin on it is very therapeutic.” 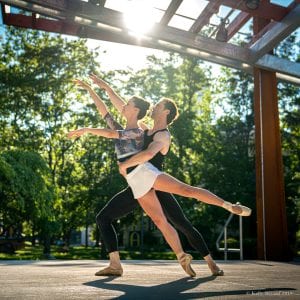 Bartolotti, 27, is in his second season with BQC, moving from Hudson Valley, N.Y., where he began his dance training at his mother’s own dance studio at a young age.

“It’s a really fun, creative outlet for kids. Other than the technique and art form that is dance, especially at a young age, it’s really good for kids just to learn basic everyday skills like following directions, or learning certain coordination skills they might learn in sports. This is a different type of outlet where kids can do that. Students that fall in love with it and really want to take it seriously going forward, because how demanding it is, it’s often super important for students to start at a pretty young age.”

He trained at American Academy of Ballet for a number of years, and Bartolotti received his Bachelor of Fine Arts degree from Adelphi University, Long Island, N.Y. He performed in multiple works choreographed by the distinguished faculty as well as guest artists and choreographers.

These include Paul Taylor’s Company B, Martha Graham’s Acts of Light, Pascal Rioult’s Bolero, and Jirí Kylián’s Bella Figura among others. Nicholas’ recent dance credits include performances in On the Town at the USDAN Performing Arts Center, The Nutcracker with the Eglevsky Ballet Company, Among other credits are various works with the New York City-based Amy Marshall Dance Company, where he toured internationally.

During Bartolotti’s first season in the Quad-Cities, “It went really well,” he said. “I really enjoyed it here. I was bummed when we had to cut the season short due to the pandemic.”

For Sunday’s program, a charcuterie picnic box will be available to order for $20 (by Thursday), and there will be a cash-only bar. BQC plans to have another outdoor performance at the Outing Club on Sept. 20 and an abridged “Nutcracker” in the round in the ballroom during the holiday season, with table seating.

“A lot of it, we can only plan so much, and the rest is a wait and see kind of thing,” Bartolotti said. “We’re really taking it week by week at this point.”