Aaron Watson
For the past 20 years, Watson has achieved success on his own terms, hand-building a lauded career through songwriting, relentless touring and more than a dozen self released albums. His independent Texas spirit and strong work ethic are emblematic of the western lifestyle; virtues which have taken him from humble honky-tonks of Texas to multiple sold-out tours around the world.

With a dozen additional records under his belt, Watson is exceeding major-label-sized metrics while maintaining his independence, further galvanizing his “Texas country’s reigning indie underdog” (Rolling Stone) brand. “There may be no more genuine singer-songwriter at the moment than Watson,” says Texas Monthly, pointing to a self-made businessman, chart-topper, and road warrior whose authenticity has made him a country music staple.

Brushville
Bloomington-Normal may not be the first place you imagine when you think upbeat rockin country music. Think again! Brushville brings down the house with sold out shows all across the country. This four-piece is in your face while showcasing their passion and talent. CMT called Brushville “explosive.” They said when thinking of their music, “think matches and gasoline…” 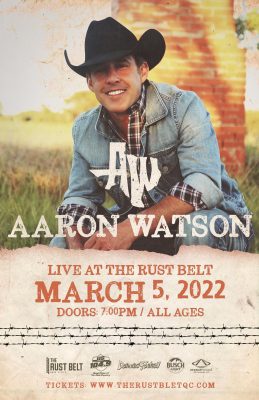 Tristan Tapscott
Tristan Layne Tapscott has been dubbed the “Quad Cities’ P.T. Barnum” and although the person who initially said it meant it as an insult, he happily accepts the title.
See More Articles From Tristan Tapscott
Advertisement
Tagged: Aaron WatsonBrushvilleThe Rustbelt