The Mockingbird On Main kicks off its new comedy series, THE FUNNY BIRD, this Saturday, November 20 at 8pm! 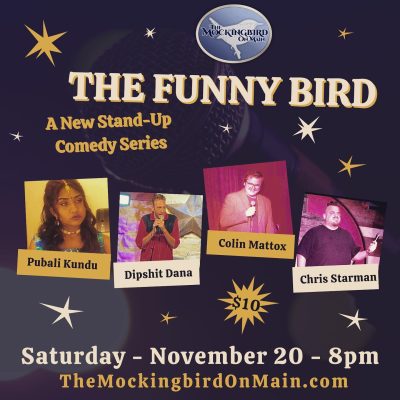 “The art of comedy seems a silly and simple endeavor… But it’s a high wire act and often there is no safety net,” Moss-Peterson said. “You tap dance through the inferno, hoping to make it through to the other side and as a comedian you are always chasing the next laugh, languishing against the ghost of all the others.”

The Mockingbird’s mission from its inception in early 2021 has been to provide an arts incubator for Quad City creatives and their passion projects. After producing two of their own productions, the company finally found a few artists to bite on the idea. The first, Haus of Ruckus, brought their riotous “Jacques”alope and sold out two weekends and many other groups are now on the schedule and will no doubt find similar success.

“When Dana brought the idea to me, it was an instant YES because I’ve long admired his talents and I dig creatives who are bold and just go for it,” Tristan Tapscott, co-owner of The Mockingbird said. His partner Savannah Bay Strandin added, “We created this space for everyone to use and we love that it’s catching on!”

“The QC comedy scene can be brutal and frustrating; there are countless unwritten rules and stage time is often given in 5 minute spurts,” Moss-Peterson said. Tapscott added, “We don’t have any unwritten rules or traditions here; the door is wide open and never really closes… I don’t know even know if the door exists.”

Tapscott and Strandin have repeatedly noted how they want kind, talented people and their projects to find a home at The Mockingbird.

“We like passionate people and Dana and this quartet of comedians love what they do and we are thrilled to have them on our stage for one night,” Strandin said. Moss-Peterson added , “This group: Chris Starman, Pubali Kundu and Colin Mattox… I see a lot of heart in them and they have a zest for the art.”

“I took 3 years away from comedy, my first set back, Colin came up and asked me to do a feature show; I bombed at a comedy contest and Pubali asked me to do a show anyway, because she heard how much I love doing standup; Chris Starman is always around and has taken countless photos from countless venues and shows around the area,” Moss-Peterson said. “Yes they are funny but they are really good people too. These people haven’t just helped me, they’ve helped others too. Something I wish to see more often in the community in the near future.”

“We don’t want to compete with the other comedy shows and venues in the area; we want to be part of that community and not replace something in that community,” Strandin noted. Tapscott added,

“We love being part of the artistic conversation in the Quad Cities and we are purposefully open to any and all  artists who want a chance to create without boundaries.”

The Funny Bird debuts Saturday, November 20 at 8pm. The doors open at 7:30 and all tickets are $10 and can be purchased in advance by visiting TheMockingbirdOnMain.com.