Ginuwine released several multi-platinum and platinum-selling albums and singles, becoming one of R&B’s top artists. Juvenile is recognized as hip-hop royalty, and is one of the pioneers of hip-hop music in the South. He is known for his distinguished voice, and his unique delivery of  hip-hop lyrics. The tour is sure not to disappoint long-time hip hop fans. 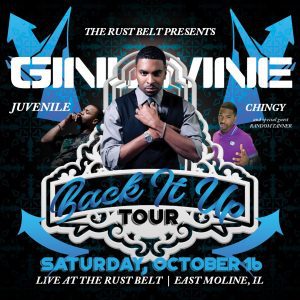 Daiquiri Factory and The Rust Belt have recently partnered together to bring quality music acts to the Quad Cities.

“Daiquiri Factory and The Rust Belt continue to bring a variety of genres to the Quad Cities. We have featured everything from rock to country. Now, we are proud to present hip hop royalty acts in the Back That Up tour,” said Kyle Peters, owner of Daiquiri Factory.

“The Rust Belt is an incredible venue and I’m proud to work with them to expand entertainment options for our community that large cities would be envious of. Having The Rust Belt as a partner venue allows Daiquiri Factory to bring a range of genres to the area year-round!” said Kyle Peters.

Back That Up is sponsored by Daiquiri Factory, The Rust Belt, The Buzz Entertainment Group, Rexroat Sound, and Michelob Ultra.

Daiquiri Factory will continue presenting live music acts at it’s location in downtown Rock Island but plans to continue its growing partnership with The Rust Belt during colder months or inclement weather.

Elgin B. Lumpkin better known by his stage name Ginuwine, is a Grammy-nominated legendary American singer, songwriter, dancer, actor, and philanthropist. Ginuwine’s career began as a member of Swing Mob, an R&B/hip-hop collective consisting of artists and record labels based in Rochester New York. The record label and music compound were founded by Donald Degrate better known as “DeVante Swing”, a member of popular 90’s R&B group Jodeci. With a multifaceted talent foundation, Ginuwine signed to Epic Records as a solo artist in the mid-1990s.

Ginuwine released several multi-platinum and platinum-selling albums and singles, becoming one of R&B’s top artists. His commercial success came from his first 4 albums: 2X Platinum, Ginuwine…The Bachelor and 100% Ginuwine with featured hit singles “Same Ol’ G, “So Anxious” and “None of Ur Friends Business”, Platinum album, The Life, and Gold album, The Senior. Known for the edgy and alluring dance sound, the diversified palette next served a smooth and romantic single that soared. Peaked at number-one on the Billboard Hot R&B/Hip-Hop Songs chart and number four on the Billboard Hot 100, the single “Differences” is still one of his top selling songs.

The explosive success in the 1990s appeared from collaborations with rapper Melissa “Missy” Elliott, singer-songwriter Stephen “Static Major” Garrett and producer Timothy “Timbaland” Mosley. Ginuwine and Timbaland became a hit-making duo when they displayed a combination of smooth vocals and an innovative production style that disrupted the music scene with the hit single “Pony“. Immediate success peaked “Pony” at number 6 on the Billboard Hot 100 with smooth upbeat tempos. The crave for “Pony” led to samples in the video game Grand Theft Auto IV, a feature in a striptease dance performed by Channing Tatum in the film Magic Mike, a cover performance by Mike Patton and Rahzel in concert, and with relevance still today as a feature on the new FOX hit television show STAR.

With success on everything he touches, up next was a trio collaboration with R&B artists Tyrese (Tyrese Gibson), and Tank (Durrell Babbs). In 2012 the R&B supergroup called TGT was introduced and signed to Atlantic Records. This collaboration of three-game changers took the R&B world by storm. Their Grammy-nominated debut album Three Kings was released in 2013, an album that still has the fans yearning for more. Acknowledging his multifaceted talent, Ginuwine entered the acting arena. He was cast as R&B singer “Romeo” in the film Juwanna Mann, appeared in several episodes of Moesha as Khalib, and appeared on Half & Half as R.J. Jackson. Off-screen, Ginuwine co-starred in the Gospel Music Channel’s debut of John Ruffin’s stage play The Ideal Husband which also stars Darrin Dewitt Henson, Jackée Harry, Clifton Powell, Shirley Murdock, Shanti Lowry, and Erica Hubbard. He also appeared as himself in the NBC series Parks and Recreation.

In 2018 Ginuwine entered the UK reality show Celebrity Big Brother 21. As a crooner and legendary artist in the industry for over 20 years, he still sell-out shows and carries a spotlight in sold-out tours; 2018 90’s Block Party Tour and the RnB Friday’s Live Tour Australia both with legendary lineups. Also carrying a large international audience, Ginuwine is selling out shows worldwide, countries as Africa, Australia, and Canada to name a few. His passion does not stop there, with new projects of music and more in the works, Ginuwine is the “Same Ol G”. His passion for his craft remains unwavering and he gearing to bring more.