As much as the music of Pitbull defines a generation and soundtracks a global movement, the words and actions of the man born Armando Christian Pérez exemplify a commitment to inspiring both personal and universal revolution. As much as he elevated himself out of the streets and on to the international stage, he also heeded the call to grow from an entertainer to an ambassador of change. As much as listeners proudly recite the words to “Time Of Our Lives” or “Give Me Everything,” they also fervently quote his equally unforgettable 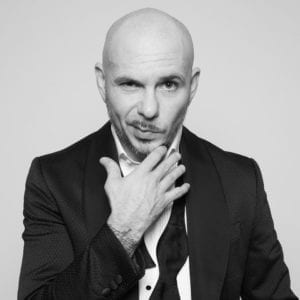 aphorisms turn a negative into a positive and dale! — his signature phrase that encapsulates Pitbull’s belief that anything is possible.

As a result, he entrenched himself at the forefront of cultural, social, political, and popular conversations, bringing his brand of inspiration, influence and impact worldwide.

Igniting his career in 2001, he utilized the platform around him to effect change from day one. As such, his hometown of Miami bestowed the keys to the city upon him in 2009. In order to uplift communities nationwide, he helped launch Sports Leadership Arts and Management (SLAM!) during 2013 as a tuition-free public charter option for middle and high school students with the first location in Little Havana. It eventually grew to 10 schools across the country, boasting a 100% graduation rate and a 97% rate of graduates who go onto college. The Miami school even hosts a national radio broadcast run 24/7 on SiriusXM. During 2018, he was invited to address the United Nations General Assembly in recognition of World Water Day on behalf of Clean Water Here. The organization recognized him as the 2018 World Water Champion. The 2019 International Achievement Summit honored Armando in the arts alongside music legends Judy Collins, Van Morrison, Smokey Robinson, Steven Tyler, Buddy Guy and Andrew Lloyd Weber, in addition to honoring Nobel Peace Prize and Pulitzer Prize winners for their accomplishments.

Delivering his message of positivity in groundbreaking fashion, he realizes a lifelong dream to inspire others with his story by joining forces with the world’s #1 life and business strategist Tony Robbins for speaking engagement all over the world. Building on this partnership, he and Robbins teamed with Learning Tree founder Bill Zanker to create the fitness chain GRIT BXNG.

At the same time, Pitbull extends his musical legacy in 2019 with a Latin opus entitled, LIBERTAD 548. Thematically, it reflects his penchant for breaking down barriers of all kinds, culture and genre, alike. The title references the courageous rescue of 548 Cubans who Pitbull’s father, Armando Sr., helped reach libertad (freedom) as part of the 1980 Mariel Boatlift. The album includes the red-hot Latin-powered hit 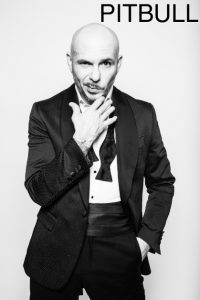 “No Lo Trates” with Daddy Yankee & Natti Natasha and “3 To Tango.” He continues to push himself as an artist, coming together with none other than Blake Shelton on the country swing of “Get Ready,” among a blockbuster tracklisting.

The full-length album will be released independently under his own Mr. 305 Records, LIBERTAD 548 represents the next chapter for one of the most prolific runs in the history of the music business. Over the course of ten full-length albums, Pitbull’s single sales have exceeded 80 million and YouTube views burgeoned past 15 billion by 2019. In addition to hundreds of gold and platinum certifications internationally, he has performed to concert audiences worldwide. Recognized for his talents, he has garnered GRAMMY® and Latin GRAMMY® awards. Moreover, superstars of all stripes and styles have sought him out for collaborations, including Jennifer Lopez, Chris Brown, Shakira, Marc Anthony, Ricky Martin, and Kesha, to name a few. A consistent headliner, he has not only performed for millions of fans worldwide, but he also took the stage at Planet Hollywood in 2015 for his Time Of Our Lives Las Vegas Residency, which ultimately resulted in multiple return engagements every year until its climactic close in 2019. In addition to the United States, his sold-out world concert tours have taken him to North and South America, Europe and the Far East. He has also completed headlining tours in China and Japan. Along the way in his journey, he has co-headlined with Enrique Iglesias, toured with Britney Spears in the U.K. and Europe, and spoken to thousands as part of Tony Robbins’ motivational seminars.

His influence seamlessly extends to television and film as well, including receiving a star on the Hollywood Walk of Fame, his own wax figure at Madame Tussauds and making his impressions in concrete at the original location of the historic Grauman’s Chinese Theater. Various specials and features about Pitbull have aired on CNBC, CNN, CBS, NBC and ABC. He has personally popped up on Empire, Shark Tank and Dancing with the Stars. He lent his music to Men In Black III and The Penguins of Madagascar and contributed the original “Ocean to Ocean” to Aquaman. In 2018, he scored Gotti, which starred none other than Academy Award® nominated legend John Travolta. He voiced characters in the animated feature films Epic and UglyDolls.

As an entrepreneur, he shows no signs of stopping or slowing down either. He kickstarted 2019 by headlining his fifth annual New Year’s Eve at Bayfront Park in Miami. Broadcast on Univision, it commemorated the opening of iLov305 Latin Steakhouse and Nightlife—created in conjunction with Sugar Factory American Brasserie. The latter eventually extended to opening in Biloxi, MI too. Since opening its doors earlier this year, iLov305 has made its mark on Miami Beach’s famed Ocean Drive as a place to see and be seen. Now, the eatery and nightlife hotspot will introduce traditional Mexican cuisine directly from Las Vegas with El Dorado 305 — an expansion of El Dorado Cantina, one of Sin City’s hottest and top-reviewed Mexican eateries. Taking up residence at iLov305 this fall, El Dorado 305 will showcase the best of both traditional Mexican and tropical Cuban cuisines under one roof.

Solely owned by Pitbull, his Voli 305 Vodka stands out as the first Latin-owned craft vodka and a homegrown South Florida brand with a growing local work force. Meanwhile, he even created his own fragrance line Pitbull. SiriusXM joined forces with Pitbull to launch the 24/7 commercial-free channel Globalization, now in its sixth year. He is also a partner in eMerge Americas, the annual tech and innovation summit held in Miami that emphasizes innovation and is committed to transforming Miami into the tech of the Americas.

Some of the most iconic brands ever jumped at the chance to collaborate. Adding to a list that includes Bud Light, Kodak, Dr. Pepper, Pepsi, Playboy, Dodge and Fiat. Norwegian Cruise Line handpicked him as Godfather to Norwegian Escape, one of the most innovative cruise ships ever built.  In 2019, Armando’s entrepreneurism scaled new heights as he partnered with Horizon Media, the largest independent media agency in the world, to launch 305 Worldwide, an agency designed to bring together the power of Horizon’s multicultural marketing, data and insights expertise with Pitbull’s creativity and incredible cultural connectivity to create custom experiential platforms and programs that are authentic and more engaging for multicultural audiences.

As always, the GRAMMY®-winning independent global superstar, education advocate, business entrepreneur and motivational speaker represents the possibility of revolution and freedom in 2019 and beyond.