The nominations are thundering in for local filmmakers Kelly and Tammy Rundle and their latest feature, “Sons And Daughters of Thunder!”

Kelly has received another nomination from the Iowa Motion Picture Association, this time for “Best Direction–Long Form” on the film. According to Tammy’s facebook, “I am so pleased for him in receiving this recognition for his hard work on this narrative film project. Congratulations again, honey! I’m beaming!” 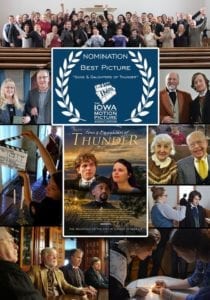 In addition, “Sons And Daughters Of Thunder” has been nominated by the Iowa Motion Picture Association for “Best Narrative Feature.”

Tammy added, “Congratulations, to those who shined in front of the camera; to our tireless crew and volunteers behind the camera; to our historic sites; to our 50+ extras; to our contributors and our supporters who made it all possible; to Kent Hawley who always believed; and to Earlene Hawley who created a beautiful play about this little known true story and laid the foundation for the film. Thank you, EVERYONE, who gave so much to THUNDER!”

Sean Leary
Sean Leary is an author, director, artist, musician, producer and entrepreneur who has been writing professionally since debuting at age 11 in the pages of the Comics Buyers Guide. An honors graduate of the University of Southern California masters program, he has written over 50 books including the best-sellers The Arimathean, Every Number is Lucky to Someone and We Are All Characters.
See More Articles From Sean Leary
Tagged: iowa film awardsJustin MarxenKelly Rundlelocal filmssons and daughters of thunderTammy RundleTristan Tapscott