Despite the PGA Tour 2020 John Deere Classic being canceled this summer due to Covid concerns, it helped raise $12.22 million for 465 local and regional charities, through the annual Birdies for Charity program. 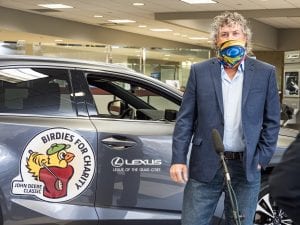 The Lexus lease winner is… Kraig Sleaford of Davenport.

through the Birdies for Charity program.

This year, because of Covid-19 protocols, all checks will be mailed to participating charities. There will be no in-person check pickups.

“Thanks to the incredible ongoing generosity of individuals, companies and family foundations, the John Deere Classic is pleased to announce that despite cancelation of the tournament we were able to raise $12.22 million, including a five percent bonus, for 465 deserving charities,” said JDC tournament director Clair Peterson.

“In particular, Deere & Company and the John Deere Foundation played leading roles in helping us maintain the charitable impact the tournament has on the community.”

The $12.22 million figure is the fourth-largest donation amount in tournament history, according to tournament records. Last year, $13.8 million was raised for 542 charities.

In the 2019 tournament, players recorded 2,091 birdies from Wednesday through Sunday during the John Deere Classic pro-am and tournament rounds at TPC Deere Run in Silvis. Individuals who pledged a penny per birdie would donate $20.91 to their designated charity 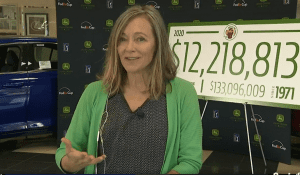 or charities. Other individuals, foundations and institutions donated lump sums.

The $12.22 million total works out to $32.58 for each of the Quad-Cities’ 375,000 residents, again making the John Deere Classic the No. 1 in per capita contributions on the regular PGA Tour, a distinction it has had for over a decade.

“Herculean effort!” posted Jeff Condit, development director for Rock Island’s Friendship Manor, on Facebook Friday. “This is the epitome of a ‘cup of cold water’ to a thirsty community. Those who are served by the 465 nonprofits may never know their benefactors, but I do, as do many others. Well done, John Deere Classic, Deere & Company, and Birdies for Charity! Our whole community is better off because of our nonprofits and the John Deere Classic.”

This year, because the tournament was canceled, all contributions were lump sum donations unrelated to the original Birdies for Charity 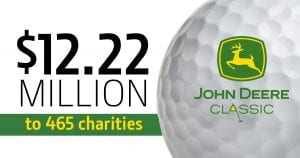 Even without an actual golf tournament, the Birdies program raised over $12 million this year.

model, which linked contributions to the number of birdies recorded during the four-day tournament and Wednesday pro-am.

Also, because the tournament was canceled, the annual Lexus two-year lease giveaway — courtesy of Smart Lexus of Quad Cities — was a random drawing of all donors instead of a drawing among donors who correctly guessed the number of birdies recorded during the tournament. Kraig Sleaford of Davenport won the two-year lease on a Lexus NX.

The free Lexus NX lease program annually serves as an incentive to potential donors to participate in the Birdies program. In a typical year, Smart Lexus of Quad Cities would have provided courtesy cars for John Deere Classic contestants and on-course evacuation vehicles. 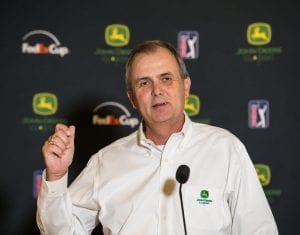 “In a year that has brought uncertainty and hardship to so many individuals and businesses, it was even more generous of Smart Lexus of the Quad Cities to maintain its affiliation with the tournament and continue its lease giveaway program. We are extremely grateful.”

The total amount donated to the charities is the result of a three-pronged fundraising effort: 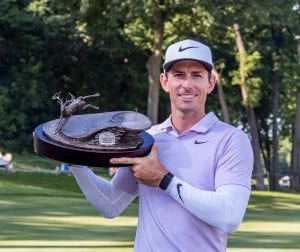 Dylan Frittelli, 30, won the 2019 John Deere Classic with a score of 21-under par 263, becoming the 23rd player in tournament history to win his first PGA Tour in the Quad-Cities. The native of South Africa and former Texas Longhorn is scheduled to defend his title July 5-11, 2021.

The JDC, which includes Birdies for Charity, is a 501(c)3 non-profit organization located in the John Deere Classic tournament offices at 15623 Coaltown Road, East Moline.

Jonathan Turner
Jonathan Turner has been covering the Quad-Cities arts scene for 25 years, first as a reporter with the Dispatch and Rock Island Argus, and then as a reporter with the Quad City Times. Jonathan is also an accomplished actor and musician who has been seen frequently on local theater stages, including the Bucktown Revue and Black Box Theatre.
See More Articles From Jonathan Turner
Tagged: birdies for chairtyBirdies for Charitydylan frittelliEast MolineJohn Deerekristy ketcham-jacksonlexus