The Quad-Cities theater company Genesius Guild was wearing masks in performance for decades before it was fashionable or medically recommended. 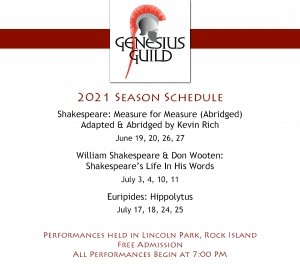 Genesius Guild‘s 2021 summer season will consist of three scaled-back productions, each starting at 7 p.m. and all 90 minutes or less.

After it had to cancel its 2020 summer season at Rock Island’s Lincoln Park Classic Theatre due to Covid, Genesius will be back this summer, with three scaled-back productions in June and July, including an ancient Greek tragedy in mask to close the abbreviated season – ensuring it will all be safe for cast, crew and audiences.

“Since we have to plan our season well in advance of the start of summer, we made some adjustments to ensure audience and participant safety, no matter what happens with vaccine distribution and Covid variants,” Genesius Guild posted this week on Facebook.

The season will start in mid-June, rather than the start of June, to give more time for vaccine distribution and allow crews a less compact stage construction schedule. 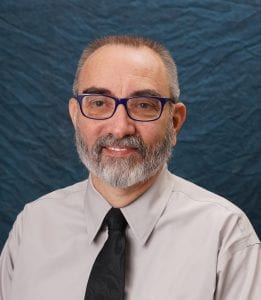 Unlike the typical 8 p.m. weekend start, the new shows will start at 7 p.m. and will be 90 minutes or less. This will remove need for stage lighting, significantly reducing the crew’s setup and teardown time.

Genesius Guild executive director Doug Tschopp said Wednesday that the audience capacity will be smaller – there will be fewer available seats in the park,  with social distancing between groups of seats, following CDC guidance, and audience members will be required to wear masks if that is still CDC guidance.

All shows (free to the public) will have small casts so they can maintain social distancing on stage as well as off stage, Tschopp said. There also will be no concessions sold.

“I mean you just have to do something, right?” he said. “We did what we could last year, putting up recordings of some past plays and doing some audio stuff. When we looked at it, we’re trying to do it super safe.”

In Shakespeare’s 1603-04 comedy “Measure for Measure,” the story centers on Claudio, who is arrested by Lord Angelo, the temporary leader of Vienna. Angelo is left in charge by the Duke, who pretends to leave town but instead dresses as a friar to observe the goings-on in his absence, according to a synopsis. Angelo is strict, moralistic, and unwavering in his decision-making; he decides that there is too much freedom in Vienna and takes it upon himself to rid the city of brothels and unlawful sexual activity.”

The middle Genesius show will be an informal “reader’s theater” format (not in costume), Tschopp said. Founder Don Wooten’s “Shakespeare’s Life in His Words” has never been done on the Genesius stage before, but over the years, has been read at area libraries – usually in April, in honor of the Bard’s 1564 birthday.

“It’s for a library or somebody like that will be looking to do something for Shakespeare’s birthday. And that’s what I think Don wrote it for and it’s wonderful and I’ve seen it performed,” Tschopp said. “For a long time, I thought that would be an interesting thing to put on the stage, when you needed something a little smaller.

“Well, that’s certainly this year and it’s super interesting,” he said, noting the work combines facts about Shakespeare’s life, with explanations of how they relate to topics and scenes in his plays. Excerpts from plays are featured as well, Tschopp said. 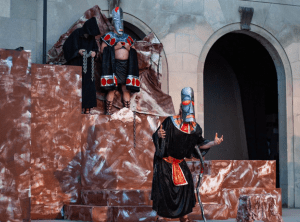 “It talks about like, here’s what his father did and because of that you see those influences and you see him in three different ways,” he said. It also talks about how Shakespeare impacted our modern-day language today,

It will be up to the director if the narrator and cast members for that hold scripts on stage, Tschopp said. “When we’ve done reader’s theater in the past, even like ‘Don Juan in Hell,’ or things like that, a lot of times we really pushed to memorize as much of it as you can.”

The last production will be the ancient Greek tragedy, “Hippolytus,” from 428 BCE, part of a trilogy. It is based on the myth of Hippolytus, son of Theseus, and how a series of misunderstandings and the meddling of the gods result in his death and that of his step-mother, Phaedra.

It is only about 90 minutes long, and Genesius will perform it in their iconic large masks, Tschopp said.

That one has only been done once before, in the ‘80s. “It’s been a long time since we’ve done that play and one of our members, a Greek scholar, really wanted us to do that play and thought it was timely right now,” he said. “If you can keep the cast size down and we can still put it on, so that one will be really a full performance of that play. Everybody gets a few little cuts here and there. But there won’t be much cut out of that.”

A bit of Genesius history

Since its founding in 1956, the Guild has performed on indoor and outdoor stages, in television and cinema (an Academy Award winner), in the Quad-Cities and at sites as far away as Chicago. They draw audiences from a wide area of the Midwest to enjoy the unusual and accessible summer program of classic theater.

Performances by Ballet Quad Cities have traditionally been included in the Guild’s annual seasons since 1996, spurring a rapid growth in its training program.

What makes the Guild’s summer program unique is its diversity and operation, including being free, outdoors, and open to any area resident who wishes to participate, according to genesius.org.

It’s also been devoted to productions most unusual for a community theater — opera in English, Greek tragedy in mask, Shakespearean 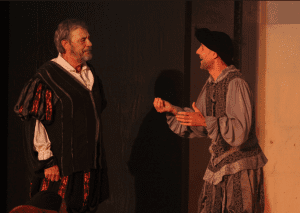 A scene from Shakespeare’s “As You Like It” in 2018 at Genesius Guild.

The first production was in summer 1957, with Sophocles’ “Antigone.” That play is one Wooten discussed in the new Genesius podcast, available at https://anchor.fm/genesius-guild.

In terms of fundraising, considering that the nonprofit organization didn’t have any 2020 shows, they did OK, Tschopp said. “People are really supportive. I think people understood that, you know, we still have a costume house and we still have to pay for utilities and insurance and all those things, whether you’re doing shows or not,” he said.

Starting the podcast and radio-oriented readings is one way to still connect with audiences during the pandemic, Tschopp said.

“You look towards the future. You’re like — what about people that can’t come to plays or miss things? What can you continue to offer, from a standpoint of continuing to spread that that knowledge and maybe build interest in the classic plays that we do?” he said.

“I think this year in some ways was an awakening for us,” Tschopp said. “For people like us, we’ve always felt like we’re fairly educational, but it’s like what can we do? Can we do other things long-term that will help us to continue to educate people about the importance of Shakespeare and Greek plays, especially.”

It gives a way for audiences to still support and enjoy Genesius Guild, no matter where they live. 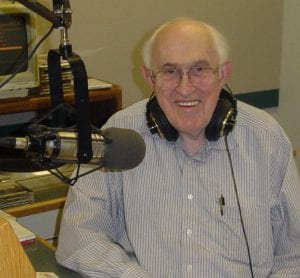 “Think of people that moved away 15 years ago. Well now we’re able to kind of connect back with some of those people that maybe were in plays and they get to least see that we’re doing stuff and that’s true,” Tschopp said. “There’s something magic about being in the audience or being on that stage because it’s interactive, right? It’s different every night, but if you can’t have that, you don’t want nothing, right?” he said. “So not exposing people to ‘Antigone,’ I think that’s a bad idea.”

Many of the old plays – whether Shakespeare or ancient Greeks — are relevant to today’s audiences, Tschopp said.

“The play has powerful messages for today,” he said of “Antigone,” which Wooten noted as well. “So I mean these Greek plays have survived 2,500 years ago because they’re so good.”

“We do those Greek plays and people come up to me after the play all the time and say, ‘You picked that play because of the current like politics or current cultural things going on,” Tschopp said. “Actually, we picked that play because we wanted to do it; it’s one of our favorites. The same stuff was happening 2,500 years ago that we experience today in Western civilization.”

Genesius doesn’t have to change the play’s language for it to pack a timely punch, he said. “It’s sad to say, we haven’t changed much in 2,500 years.”

Jonathan Turner
Jonathan Turner has been covering the Quad-Cities arts scene for 25 years, first as a reporter with the Dispatch and Rock Island Argus, and then as a reporter with the Quad City Times. Jonathan is also an accomplished actor and musician who has been seen frequently on local theater stages, including the Bucktown Revue and Black Box Theatre.
See More Articles From Jonathan Turner
Tagged: Don WootenDoug TschoppGenesius GuildLincoln Parklocal theaterQuadCities theaterRock Island