Maj. Gen. Christopher O. Mohan will take command of the U.S. Army Sustainment Command at a ceremony that will be held at Rock Island Arsenal on June 15. 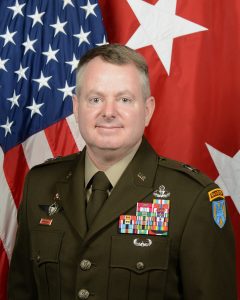 ASC Headquarters is located on Rock Island Arsenal, and the commanding general of ASC is designated as RIA’s senior mission commander.

Mohan replaces Maj. Gen. Daniel G. Mitchell, who retired from the Army last month. Matthew Sannito, a civilian member of the Senior Executive Service, has served as ASC’s executive director in the interim.

Mohan will become ASC’s 11th commanding general since the command was established in October 2006.

Mohan comes to ASC from Kaiserslautern, Germany, where he served as commanding general of the 21st Theater Support Command.

A native of Carthage, North Carolina, Mohan was commissioned as an officer in 1989 following his graduation from Appalachian State University in Boone, North Carolina. His assignments include overseas deployments to Iraq and Afghanistan, as well as assignments at Fort Bragg, North Carolina; Fort Lewis, Washington; Fort Hood, Texas; Tooele Army Depot, Utah; and Scott Air Force Base, Illinois.

Mohan has also served at Department of the Army Headquarters and at the headquarters of the U.S. Army Materiel Command, ASC’s higher headquarters.

Along with the bachelor’s degree he earned at Appalachian State, Mohan holds master’s degrees from both the U.S. Naval War College and U.S. Army War College.

Sean Leary
Sean Leary is an author, director, artist, musician, producer and entrepreneur who has been writing professionally since debuting at age 11 in the pages of the Comics Buyers Guide. An honors graduate of the University of Southern California masters program, he has written over 50 books including the best-sellers The Arimathean, Every Number is Lucky to Someone and We Are All Characters.
See More Articles From Sean Leary
Tagged: christopher mohanRock Island Arsenalu.s. armyu.s. army sustainment command