Matthew Perry Could Really Use Some Friends Right Now

I feel bad for Matthew Perry.

Let’s face it, the road after “Friends” has not been kind to the once-ubiquitous ’90s star. From alcoholism to rehab to flop films and shows, Perry has pretty much been on the downward slope since his career peak with one of the most popular sitcoms of the ’90s, and beyond, on streaming services.

The career paths of any “Friend” not named Jennifer Aniston have followed more or less the same path — albeit with considerably less personal drama. All of the other “Friends” have pretty much settled into being much more minor players on TV and films, but all of them have seemed ok with that for the most part, and have avoided major personal issues, except for Perry.

Recently, he’s gotten back into the spotlight, however, it’s unfortunately in a way which hasn’t exactly been 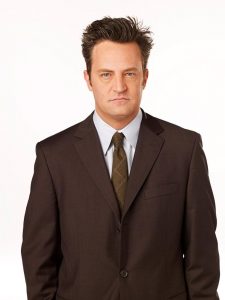 Anyway, Perry matched with a woman named Kate Haralson. She’s 19, Perry is 50-something. Big age gap, to be sure. But on dating sites, you get to choose the age range you match up with, so obviously Haralson had in her dating profile that she was open to dating guys in their 50s, like Perry, and, vice versa.

Ok, fair enough. I don’t judge. Age is just a number. Once someone is an adult, they can do whatever they want. If you’re over 18, and want to date an 88 year old, good on ya, go “Harold and Maude” all you want, I don’t really care. I wouldn’t do it, but that’s me. I’m a little bit younger than Matthew Perry, but I can’t imagine dating a 19-year-old. I mean, how many times can one man pretend to enjoy listening to Lil Peep? (For the answer, ask Lil Peep’s father.) But, hey, whatever people want to do to pursue their happiness is cool with me.

But, don’t BS that either.

Don’t say you’re all in on that, and then yank it back.

And that’s what Kate Haralson did.

Haralson matched with Perry, and then, she lied to him. Under the pretense of being interested in him, she pretended to like him and engage in “sincere” conversations with him over video chatting. Unbeknownst to Perry, she also recorded those conversations, so she could post them on social media later on to make fun of Perry and say that she wasn’t really interested in him, and to somehow cast negative vibes upon the age difference between them — an age difference she herself didn’t advertise as being a problem in their dating profiles.

Some people have jumped on Perry in regard to that, saying that even if she put that she was interested in fiftysomething guys that he shouldn’t be swiping right on a 19-year-old. And, yes, you certainly have a right to that opinion.

But the thing is, those are merely our OPINIONS. The legal age is 18, and therefore she is an adult, and has the right to make that decision for herself, same as he does. You can’t say that someone who is 19 is an adult and deserves rights and should be listened to and should be regarded as an adult when it comes to some decisions and opinions, and then turn around and say that same person is somehow a victim because they don’t have agency to make their own decisions. You have to set a baseline for what the rules are going to be, then follow them. That’s only fair.

And you also have to regard the subjectivity of the situation. Now, a 19-year-old girl who just got out of an Amish colony and is out on 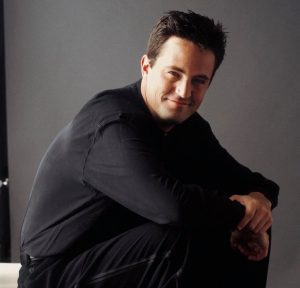 Perry had no idea that after “Friends” he would have little to no career. But hey, not such a bad resume.

Rumspringa, yeah, she may be pretty naive and should be held to a different standard. You could certainly see her not being ready for a relationship with a man in his 50s, especially one who’s a TV star. Although if she’s Amish, she’s probably never seen him on TV, because they don’t have electricity, which is really kind of a mind-bender, but, I digress…

But, a 19-year-old who’s a TikTok star, who’s obviously recognized that she can use her attractiveness to manipulate others and gain from it — and, again, fair enough, that’s fine as long as the arrangement is between consenting adults — should be held to a different standard.

Haralson was completely in control of her situation. She obviously knew who Matthew Perry was and was using him to gain fame, which obviously worked, otherwise I, and others, wouldn’t be writing about her. She made a very calculated decision.

Perry, on the other hand, did not. In fact, she, at 19, was much wiser and savvier in the exchange than the fiftysomething actor. It’s really kind of sad.

Having watched the videos, it’s extremely cringey for Matthew Perry, because he seems cluelessly sincere. Yeah, he’s an actor, but, let’s face it, he’s not THAT good of an actor. It’s kind of, well, pathetic. It’s sad that a man who’s obviously struggled with addiction is still addicted to the delusion that his fame has rendered him bulletproof to manipulation, which has probably been reinforced by people kissing up to him for so many years. I kinda feel bad for him.

I don’t feel bad for Haralson, despite her attempts to play the victim. Because she was not, and people are calling her on it. Much to her chagrin, millions of people on social media — the majority of them women — are excoriating her for what she did. And, they have a point.

At some point, adults need to take responsibility for their actions. She was 19 years old, and technically an adult. She was on a dating site where her age parameters, that she willingly selected, included men in Matthew Perry’s age range, and therefore she, a grown adult taking agency for her actions, indicated she was open to a relationship between another consenting adult within that age parameter. So, why is she complaining? She had 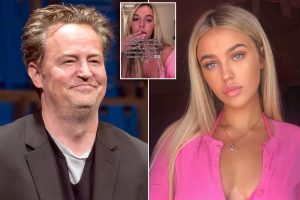 complete control over her environment, and chose it, and, what’s more, manipulated it, and Perry, to gain “fame.”

But Matthew Perry, however stupid and clueless his decision may have been, did not consent to being manipulated.

The fact that Haralson basically lied to Perry, leading him on that she was interested in a relationship with him, while recording their conversations in order for her to exploit them to gain some measure of notoriety because she was a girl being talked to by a guy who was/is famous, is cruel. And it would be just as cruel if it was a 19-year-old guy, and the older woman was Courtney Cox, and the guy published embarrassing videos of Cox so he could get TikTok clout.

Manipulation is manipulation. Lying is lying. Regardless of whether someone is famous, or is just using someone else to become famous.

And, a bit of advice, Matthew Perry: Stick with your Monicas.

I wish you well. Or, at least, I wish you better luck than Ross Gellar.

Sean Leary
Sean Leary is an author, director, artist, musician, producer and entrepreneur who has been writing professionally since debuting at age 11 in the pages of the Comics Buyers Guide. An honors graduate of the University of Southern California masters program, he has written over 50 books including the best-sellers The Arimathean, Every Number is Lucky to Someone and We Are All Characters.
See More Articles From Sean Leary
Tagged: '90s celebritiesbumblecelebrititescourtney coxdating sitesfriendshingei'll be there for youjennifer anistonkate haralsonkate haralson matt perrymatchmatthew perryonline datingrayaraya haralsonreyatinder