A Tempest Is Brewing At Genesius Guild

The Genesius Guild will present The Tempest by Shakespeare on June 15, 16, 22, and 23. Performances start at 8:00 p.m. at the Lincoln Park Classic Theatre in Rock Island. Admission is free.

The Tempest is thought to be one of the last plays that Shakespeare wrote without collaborating with other authors. Beneath the comic themes about a ship crew stranded on the enchanted island, the show explores themes of family, betrayal, and forgiveness. 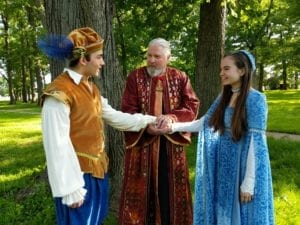 Many scholars believe that Shakespeare wrote himself into this work. Prospero, the magician at the center of the show, engineers events to create the world we see in the play. Then, at the end of the show, Prospero renounces magic, breaking his staff and throwing his book of spells into the ocean. This is considered by many scholars to represent Shakespeare’s retirement from full-time playwriting.

Is this interpretation correct, or was Shakespeare writing about something else entirely? Come to the show and decide for yourself!

The Genesius Guild is a community theatre organization located in the Quad Cities specializing in free classical drama. Founded in 1956, the group performs Greek drama, Greek comedy, the works of Shakespeare, and other classical authors every weekend throughout the summer. The schedule also includes ballet in partnership with Ballet Quad Cities.

Sean Leary
Sean Leary is an author, director, artist, musician, producer and entrepreneur who has been writing professionally since debuting at age 11 in the pages of the Comics Buyers Guide. An honors graduate of the University of Southern California masters program, he has written over 50 books including the best-sellers The Arimathean, Every Number is Lucky to Someone and We Are All Characters.
See More Articles From Sean Leary
Tagged: Don WootenGenesius GuildGreek dramaslocal theaterShakespeareTempest