Home › Articles › Things To Do › ’39 Steps’ Stepping Into Countryside

Based on the 1935 movie by Alfred Hitchcock, the frenetic comedy The 39 Steps will be the first spring play Countryside Community Theatre will have ever produced. Countryside’s mission to produce live entertainment year round kicked off this past holiday season with Tapscott and White’s A Christmas Carol. “We were overwhelmed by the support of this new mission,” Board President Lonnie Behnke said. “We have long history in the Quad Cities and we are thrilled to be moving forward and being able to expand our programming.” 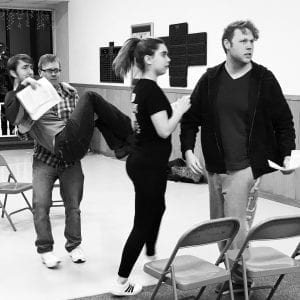 In Patrick Barlow’s adaptations of  The 39 Steps, four actors play over 100 characters in this Tony-winner thats part juicy spy novel, part Monty Python, and it preserves the brilliance originally created by the master of suspense himself Alfred Hitchcock. “This is not a conventional play and requires some serious outside the box thinking and I love to live in that kind of world,” said director Tristan Tapscott. “It’s cinematic and frenetic and moves so fast that you have to reinvent storytelling as we all know it and thus creates some incredibly unique moments.”

Joshua Malone plays our suave hero Richard Hannay who learns from a beautiful spy about a plot of international espionage. The woman is killed in Hannay’s flat and he suddenly finds himself caught up in a race from London to Scotland in hopes of stopping military secrets from being smuggled out of the country. As he searches for the secret of “The 39 Steps” he is doggedly pursued by the police who believe he is a murderer. Three of the female roles will be played by Martha Behnke, while the remaining multitude of characters are played by just two actors: Justin Tegeler and Michael Byrne.

Sean Leary
Sean Leary is an author, director, artist, musician, producer and entrepreneur who has been writing professionally since debuting at age 11 in the pages of the Comics Buyers Guide. An honors graduate of the University of Southern California masters program, he has written over 50 books including the best-sellers The Arimathean, Every Number is Lucky to Someone and We Are All Characters.
See More Articles From Sean Leary
Tagged: 39 StepsAlfred HitchcockCountryside Community TheatreJoshua Malonelocal theaterLonnie BehnkeMartha BehnkeTristan Tapscott