Home › Columns › Sean Leary › Dr. Seuss’ Estate Did The Right Thing, And Created Another Lesson From The Late Author

Dr. Seuss’ Estate Did The Right Thing, And Created Another Lesson From The Late Author

Think about you 10 years ago. Different person?
How about 20 years ago or more, around the time of 9/11. Different person?
We all evolve, we all change, according to our times, environments and circumstances. The question, as always, is how do we change and how much? Is it for good? Is it for ill?
This week, the estate of Dr. Seuss Enterprises, which controls the late author’s books, decided to discontinue publication and licensing of six books by Theodor Seuss Geisel.
In a statement, they gave a succinct reason, saying, “These books portray people in ways that are hurtful and wrong.”
A cursory glance at the books certainly backs that up. Each of them contain archaic stereotypical caricatures of minority cultures, including African-Americans and others, but overwhelmingly of Asian-Americans. All of them are wrong, and could certainly be hurtful, especially to kids, particularly to kids of those racial and ethnic groups.
Most of the books are not very well known. The only one which is pretty famous in Seuss’ catalog is “And To Think I Saw It On Mulberry Street,” which was Seuss’ first book published, way back in 1937.
To say that social attitudes, especially those towards minority peoples, were different back in the 1930s is an extreme understatement. 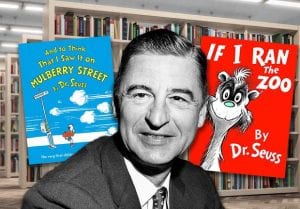 Racism towards anyone who wasn’t a white anglo-saxon protestant was pretty much de rigeur, and caricatures of all minority and ethnic populations, regardless of skin color, were abundant throughout the media, from books to daily newspaper editorial cartoons. If you went back into the archives of any local newspaper during that time, I guarantee you would find editorial cartoons with offensive caricatures and stereotypes.
That was 1937. Height of the depression, not all that long after slavery, right as the KKK was rising, just two decades after the first world war and the influx of immigrants into this country. Keep in mind there were people protesting and angry more than two decades AFTER this when young, handsome, rich, charismatic John F. Kennedy was running for president. Because he was an Irish Catholic. Imagine what it was like for people 23 years EARLIER who weren’t white, handsome, rich, and charismatic. Not exactly enlightened and tolerant times. Racism was virulent and abundant in the 1930s and certainly the 1940s as we entered into World War II. And this is the era in which Seuss and his work was first born and evolved.
Because of that, quite frankly, it’s more surprising to me that there weren’t MORE examples of harmful and racist caricatures in Seuss’ books.
Not because I think Seuss was a virulent racist, but because he was a product of his time, that time, in American history.
That’s not to excuse it at all, but it is to offer some perspective.
And perhaps, another lesson, from the author’s work.
I agree with the Seuss estate and publishers to remove those books with racist caricatures in them from his catalogue, although I would 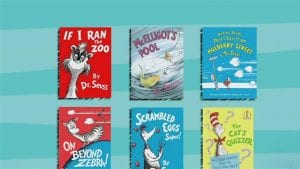 likewise agree with those books being re-released sans those images. Looking at the books, the overarching themes and images weren’t racist, and removing the hurtful caricatures would improve them. However, I also understand the decision to completely remove them as well.
This was a smart and compassionate decision by the estate of the author.
But it’s also a decision that reflects the time in which his ancestors evolved, and our own society as it stands now as well, a positive lesson of how things can get better. And this is a lesson we can all learn from.
Dr. Seuss was a person of his time, as we all are, and I don’t think he was willingly being hateful any more than I would condemn pregnant women pre-1970 who smoked or my parents and others like them who spanked their kids, or doctors in the early 1900s who prescribed morphine and cocaine to people. We’re all the products of our times, and it’s easy to see how those caricatures got into Seuss’ work, since those racist archetypes were typical of most work of that time. The people weren’t as enlightened or socially evolved. And, also, it’s easy to understand how the vast majority of Seuss’ racist caricatures were Asian, as Seuss was in the Army and worked with the military during WW II, when the Japanese were our enemies, and Americans were forcefully propagandized against Asian people.
I’m not saying he was right. I am saying that everyone is a product of their environment and upbringing and they reflect that, particularly in what they believe to be cultural norms. The question, as always, is what happens when those cultural norms change and evolve to be more enlightened. Do you continue to hold tight to archaic belief systems and biases, or do you open your mind and your life to new attitudes and pathways?
The Seuss folks obviously have decided upon the latter, and that’s the right decision. I applaud them for it.
And obviously this is the lesson to be learned here.
We all make mistakes. We have all done things we cringe at in retrospect, or regret.
But all of our decisions and actions have one thing in common — they are the product of who we are and who we were at the time we made them. 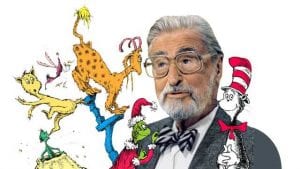 Our lives, our perspectives, should be constantly growing and evolving as we encounter new information and outlooks. We should always be striving to be better people, to grow in a way that’s going to create a better path for ourselves and a better example for our children and those around us.
But we’re also limited by our background and our knowledge base and level of understanding at that time, and so we should look at those decisions we’ve made, and we should consider them and learn from them.
That’s the lesson here.
That’s the example the Seuss estate is setting, a new narrative, a new lesson, if you will, from the offspring of a man whose work was all about teaching those new lessons and getting people to think about the world around them and consider different perspectives.
Wherever he is now, Dr. Seuss is undoubtedly proud of his ancestors for that.
Because they’ve learned, they’ve evolved, and in doing so, they’ve made his legacy better and more in line with the overarching themes and subjects of his life’s work.
As for those people who decry this as censorship, you are incorrect. They weren’t censored, they made the decision to alter their own work, which is their right.
As for those who cry about how they shouldn’t be changed, you are wrong. The caricatures were racist and harmful to children of those racial backgrounds, and if you’re as big a fan of Dr. Seuss as you claim to be, you would know that an overarching theme of his work is inclusion, and he wouldn’t want those kids to feel bad or alienated from the bigger messages in his work.
And as for those pundits who continue to push this ridiculous Culture War narrative to keep people angry and divided in order to desperately hold on to your fading audience or to distract people from what’s happening in the corridors of power, you’re all a bunch of ridiculous, histrionic buffoons and I hope your audience wises up and gains some perspective and context.
I would recommend they start by turning off the TV and reading and thinking about what I’ve just written.
And then maybe, actually reading some of Dr. Seuss’ finer works, such as “The Sneetches And Other Stories,” and considering them as well.
Advertisement

Sean Leary
Sean Leary is an author, director, artist, musician, producer and entrepreneur who has been writing professionally since debuting at age 11 in the pages of the Comics Buyers Guide. An honors graduate of the University of Southern California masters program, he has written over 50 books including the best-sellers The Arimathean, Every Number is Lucky to Someone and We Are All Characters.
See More Articles From Sean Leary
Tagged: #drseuss#drseussbooks#drseusscanceled#drseusscontroversydr. seussseuss controversyseuss estateto think that i saw it on mulberry street