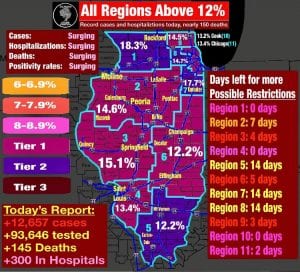 The Illinois Quad-Cities is part of Region 2, as shown in this map from earlier this year.

BREAKING NEWS: Illinois’ Region 2 could be headed backwards towards another, at least partial, shutdown, if covid-19 numbers continue to break in the wrong direction.

The Illinois Quad-Cities is a part of Illinois Region 2, which includes Peoria and its surrounding areas, and those spots have been a hotbed for rising covid cases in the last two weeks, according to reports. Peoria County is the eighth worst county in the United States over the last week, relative to their population, according to a report by the New York Times based upon numbers 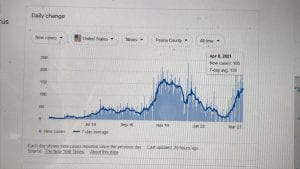 from throughout the United States.

That has led some Peoria area restaurants and businesses to shut down or enact more mitigation policies, and has triggered the Illinois Department of Health to warn Region 2 of possible backsliding towards more mitigations and possible shutdowns in the coming weeks if numbers don’t improve.

Sean Leary
Sean Leary is an author, director, artist, musician, producer and entrepreneur who has been writing professionally since debuting at age 11 in the pages of the Comics Buyers Guide. An honors graduate of the University of Southern California masters program, he has written over 50 books including the best-sellers The Arimathean, Every Number is Lucky to Someone and We Are All Characters.
See More Articles From Sean Leary
Tagged: #covid19#quadcitiescovid#quadcitiescovidcasescovid casescovid-19rock island county health department