How do you spell an upcoming film blockbuster?

“We’re still pinching ourselves with this news,” Beck and Woods tweeted on Tuesday of the planned pic “65.” “Adam Driver will be the star of the next film we’re directing for Sony. He’s one of our favorite artists on the planet. Can’t wait to share this special movie with all of you.”

In May, Variety reported a reunion for Beck and Woods (both 35-year-old Bettendorf High alums) with Raimi (“Spider-Man,” “The Evil Dead”), as the two recently wrote and directed one episode of Raimi’s Quibi series “50 States of Fright.”

“Raimi Productions is proud to be teaming up with Scott Beck and Bryan Woods,” Raimi said then. “They have exceeded all expectations in my experience with them at Quibi and we have the utmost confidence in their brilliant story. I am honored to once again be joining forces with our partners at Sony Pictures. We have a wild and thrilling blockbuster that we can’t wait to share with the world.”

Under their newly formed Beck/Woods banner, the duo will produce along with Sam Raimi and Zainab Azizi, who will produce for Raimi Productions with Debbie Liebling. Plot details for the original story are being kept under wraps, according to deadline.com. 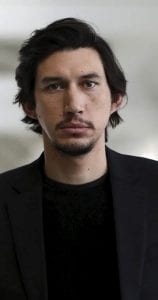 It is unknown when “65” will go into production, as Driver has a handful of pics to choose from after he finishes shooting Ridley Scott’s “The Last Duel,” which just restarted production after it was halted this spring due to the Covid-19 pandemic. After that finishes, Driver has Scott’s “Gucci,” having recently signed on to co-star opposite Lady Gaga.

“The Last Duel” reunites stars Matt Damon and Ben Affleck, who co-wrote the screenplay about a royal dispute.

Driver, 36, is coming off a busy 2019 that included his Oscar-nominated performance in Noah Baumbach’s Marriage Story, Amazon Studios’ The Report and reprising his role of Kylo Ren in Star Wars: The Rise of Skywalker.

“And while there are zero plot details, it’s safe to say this is going to be something to keep an eye on,” slashfilm.com said of “65.” “Driver is one of those actors who seems to pick and choose his projects rather than just latching on to any random movie, so the fact that he’s onboard shows promise.”

Beck and Woods are best known for the critically acclaimed box-office smash A Quiet Place (2018), starring Emily Blunt and John Krasinski, based on their original screenplay. The film, and which they also executive produced, earned $340 million worldwide and Beck and Woods were nominated for Best Original Screenplay at the 2019 Critics’ Choice Awards and the Writers Guild of America Awards, and won Best Film Screenplay at the Saturn Awards.

“A Quiet Place Part II” was written and directed by Krasinski, based on their characters, and its mass release has been delayed until next April.

Beck and Woods also wrote and directed the 2019 Halloween thriller “Haunt” for producer Eli Roth. That film earned acclaim from several outlets, including The Los Angeles Times, Hollywood Reporter, Parade magazine and the Chicago Sun-Times, which called it “stylish and creative…a quite grisly horror gem.”

Beck and Woods are writing “The Boogeyman” for 20th Century Fox and 21 Laps, based on Stephen King’s iconic short story of the same name, according to beckwoods.com. They’re also putting their pen on Focus Features’ “Sovereign,” starring Oscar winner Mahershala Ali, and their “50 States of Fright” episode starred Taissa Farmiga and Ron Livingston.

Jonathan Turner
Jonathan Turner has been covering the Quad-Cities arts scene for 25 years, first as a reporter with the Dispatch and Rock Island Argus, and then as a reporter with the Quad City Times. Jonathan is also an accomplished actor and musician who has been seen frequently on local theater stages, including the Bucktown Revue and Black Box Theatre.
See More Articles From Jonathan Turner
Tagged: A Quiet Placeadam driverBeck and WoodsBryan WoodsChickenzillaquadcities filmmakersquadcities filmsquadcities moviesScott BeckStar WarsStephen KingThe Boogeyman