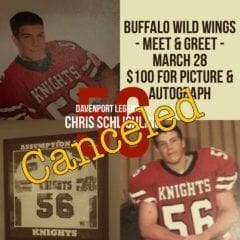 Sometimes life really, really isn’t fair. According to a post on Facebook, or, as Joe Biden calls it, “you know… that thing… that one thing with the people,” the Official Chris Schlichting Meet, Greet, Autograph And Optional Worship Session originally slated for March 28 at Buffalo Wild Wings, has been — are you sitting down, because you should be — canceled. That’s right. First Uncle Rico’s planned appearance where he was going to throw a football not just over the Mississippi, but over the hill in Rock Island to an NFL scout standing in the... Read More