Quad-Cities Getting Stormy With A Chance Of Makin’ It Rain 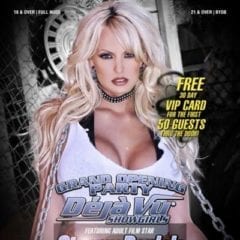 Things are going to be getting a little Stormy in Davenport, with a high chance of playas makin’ it rain. Former Donald Trump hookup and adult entertainment star Stormy Daniels will be in the Quad-Cities Friday, March 13, not to get Harris Pizza (ok, well, maybe that too) for the grand opening of the new strip club, Deja Vu Showgirls, at 5220 Grand Ave., Davenport, in the old Tuxedo’s spot. Stormy, who rose to fame in the adult film world and rose to mega-fame when it was revealed that Donald Trump had allegedly paid her, via his former attorney Michael Cohen, almost a quarter-million... Read More