Bettendorf Park Band Closes Its Season With The Favorites 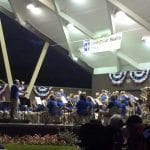 It’s time for Bettendorf Park Band to give you its 2016 mixtape. The band will end its 48th season with a free concert at 7:30 p.m. Friday at Veteran’s Memorial Park, Bettendorf and the show, as per tradition, will be a favorites gig featuring the band members’ favorite pieces from throughout its year. “We traditionally do at the end of each season a favorites concert that is pieces that have been voted on by the members of the band as their favorites and it’s put together and that’s what we’re having this Friday, it’s a tradition we’ve done for many years,” said Sean Talbot,... Read More