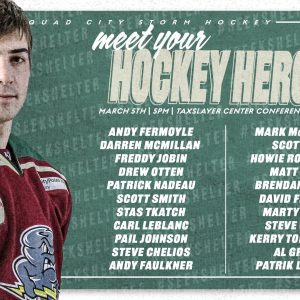 Tuesday night the Quad City Storm defeated the Vermillion County Bobcats 7-1 at the TaxSlayer Center.  The win clinched the organization’s first ever President’s Cup playoff berth.   Playoff game dates will be announced in early April and tickets can be purchased at that time at QuadCityStorm.com and the TaxSlayer Center box office. The Storm takes the ice again Saturday versus the Evansville Thunderbolts. The game will be a celebration of 25 seasons of hockey in the Quad Cities and will feature a free pregame autograph session with former Storm and Mallard players and a postgame jersey... Read More