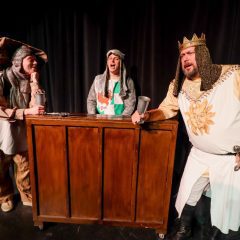 I really wanted to enjoy Quad-City Music Guild’s first complete musical in a year and a half, “Monty Python’s Spamalot,” which is available to be streamed online June 11 and 12 at 7:30 p.m., and June 13 at 2 p.m. But due more to its supremely silly, groan-inducing, seemingly unending source material than its eminently capable cast and crew, this two-hour-plus filmed version is disappointingly lifeless and unsatisfying. Despite opening on the day where the state of Illinois is allowing all theaters to open at full audience capacity, the Guild months ago decided to stage “Spamalot” with... Read More