Monsters Popping Up In The Quad-Cities This Weekend At Pop-Up Horror Market! 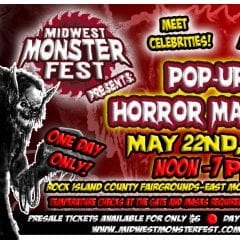 Midwest Monster Fest 2020 is proud to welcome Richie Ramone to our September 5th and 6th event at The Rust Belt in East Moline, Illinois! Richie joined the Ramones in February 1983 til 1987. He played on the Ramones albums Too Tough to Die, Animal Boy and Halfway to Sanity and appears on their compilation albums Greatest Hits, Loud, Fast Ramones: Their Toughest Hits and Weird Tales of the Ramones, and on the Ramones live DVD It’s Alive 1974-1996. He penned the Ramones’ hit song “Somebody Put Something in My Drink” which is included on the album Ramones Mania, the first Ramones... Read More