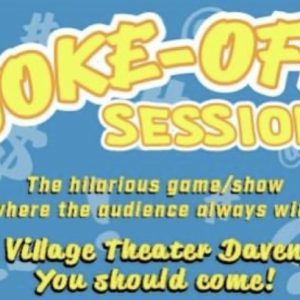 Joke-Off Session is a brand new comedy game show coming to The Village Theatre on July 30! The show will feature 3 teams of comedians, using their joke writing skills, to compete in 3 rounds of point earning punchlines! Each round a little different, and a little harder. At the end of 3 rounds, the audience will eliminate the team with the fewest points, and the two leading teams face off in a roast battle round, earning extra points to claim the prize of Joke-Off Session champs! The show premiers July 30 at 8pm at The Village Theatre in the Village of East Davenport! Get your tickets here: JOKE... Read More