After 16 Long Months, “Saturday Night Fever” Finally Opens at Circa ’21 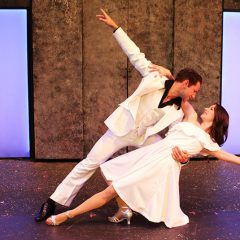 After an unanticipated, unwanted and uncontrollable delay of nearly 16 months, a disco-era sensation is finally stepping out at Circa ‘21 Dinner Playhouse, in the long-awaited debut of “Saturday Night Fever,” a 1998 musical that Broadway World called “a fast and fun night of musical theater” that’s “brimming with so many ‘wow’ moments.” This exhilarating musical was adapted from the Oscar-nominated 1977 movie smash that catapulted the Bee Gees to international fame and made a household name of star John Travolta, and will be presented at the beloved Rock Island venue by a cast... Read More