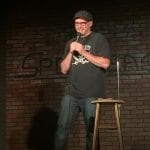 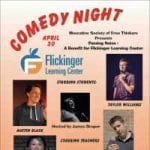 Getting your laughs on for a good cause is a win for everyone involved, and Cyndi Hartley is hoping to bring those positive vibes to Muscatine Saturday night as the Muscatine Society of Freethinkers will present a comedy and music show entitled Passing Notes: a Benefit for Flickinger Learning Center. The event will be upstairs at Boonies on Iowa Avenue. Doors open at 6:30 p.m. Comedy starts at 7 p.m. and music starts at 9 p.m. Comics on the bill include Chris Schlichting, Nikki Gillette, Austin Black, Taylor Williams and James Draper. Tickets are $12 in advance and $15 at the door and can be purchased... Read More