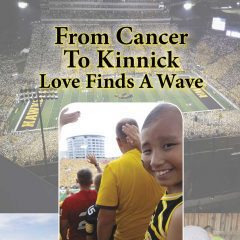 When Jeff and Renae Hoskins of Rock Island adopted their adorable little girl from China in early 2008, they had no idea that eight years later, Ava and her family would be plunged into an unimaginable bout with a rare, advanced childhood cancer. Now 14 and starting her freshman year at Jeff’s alma mater, Alleman High School in Rock Island, Ava is in remission and wrote an introduction to Hoskins’ memoir of their extraordinary experiences – “From Cancer to Kinnick: Love Finds a Wave,” to be released Sept. 3 by Ice Cube Press of North Liberty, Iowa. “I hope that you will be inspired,”... Read More