I Never Saw Another Butterfly at The Black Box Theatre 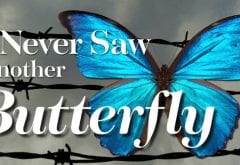 The Black Box Theatre (1623 5th Avenue Moline) brings yet another thought-provoking and powerful show to the stage. I Never Saw Another Butterfly is a collection of works of art and poetry by Jewish children who lived in the concentration camp Theresienstadt. They were created at the camp in secret art classes taught by Austrian artist and educator Friedl Dicker-Brandeis. The book takes its title from a poem by Pavel Friedmann, a young man born in 1921 who was incarcerated at Theresienstadt and was later killed at Auschwitz. The works were compiled after World War II by Czech art historian Hana... Read More

Blackbox Opens Fourth Season With ‘I Never Saw Another Butterfly’

The Black Box Theatre in downtown Moline will open their fourth season with “I Never Saw Another Butterfly” a play by Celeste Raspanti. “We chose to do the play in honor of Holocaust Remembrance” said director and co-founder of the theatre, Lora Adams. The piece is an inspiring story that shows how art can be used in times of tragedy and is centered around Raja, a Czech teenager forced into Terezin, a Jewish ghetto. The camp was a stopping point before being sent to the death camps, particularly Auschwitz. Fifteen thousand children under the age of fifteen passed through Terezin. Less... Read More