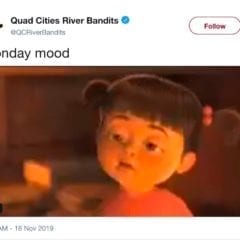 With the dark cloud of potentially having their major league affiliation to the Houston Astros cut, leaving them with an uncertain fate, the Quad City River Bandits officials remained mum on Monday, releasing only a cryptic post on Twitter. The GIF, captioned “Monday mood,” featured a little girl from a Disney film with an exasperated expression on her face. According to an article published Saturday in the New York Times, a Major League Baseball proposal has been forwarded that would cut ties between 42 minor league teams and their major league partners. The Quad City River Bandits, a minor... Read More