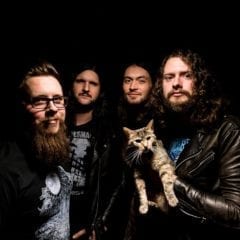 If you have any energy left after the Halloween weekend, head over to the Rock Island Brewing Company for an early show on Sunday night. Wake Brewing and LoPiez Pizza are sponsoring the show, which will paint the brick walls of RIBCO with three distinct shades of heavy. Ripple Music’s Horseburner is swinging thru RIBCO on a monthlong American tour. Their Appalachian-rockslide rumble is less groove-based than fellow West-by-god natives Karma to Burn. It’s more like a mineshaft collapsing in slow motion while the miners sing hymns in the dark. Their new record finds the band embracing... Read More