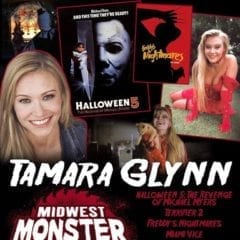 Midwest Monster Fest 2020 is proud to welcome Tamara Glynn to their Sept 5th-6th event! Glynn made her television debut in 1987 on the short-lived NBC musical, Rags to Riches. The following year, she guest-starred as Susan Fryman on the ABC sitcom Growing Pains. Glynn first became associated with the horror genre when she guest-starred on an episode of Freddy’s Nightmares, the series based on the Nightmare on Elm Street franchise. She appears as Laura in the episode “Love Stinks”, directed by John Lafia and co-starring Jeffrey Combs. She also appeared on the daytime soap opera... Read More