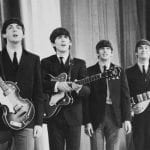 When referring to a band of fresh young men back in the 1960’s, a large recording company once said they “didn’t like the sound, and groups of guitars were on the way out”. That band, The Beatles, sure proved them wrong. A one of a kind event is coming to the Quad Cities, and you won’t want to miss it. Bret Dale, a musician from River Music Experience will be hosting a FREE guitar circle playing only Beatles songs! This guitar circle will be taking place on Saturday April 1 from 1:30-3pm in the Grand Lobby of the Putnam Museum (1717 W 12th Street Davenport). If you are interested in participating... Read More