Advice to my son is good advice to myself as well

My son Jackson turned eight this week. He is undeniably the best person I’ve ever had the honor of meeting, and I’m looking forward to experiencing the adventure of his life with him. And as that time goes by, he may ask me for the advice I’ve gained in my years before him. Which is why I started writing this list shortly after he was born, and I’ve added to it and published it every year on his birthday since. And as I look at the list, it’s good advice for me to follow as well. A friend is someone who is with you when you have nothing to offer them but your friendship. Remember... Read More 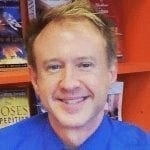