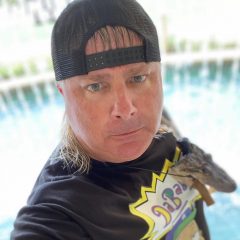 Comedian and character Donnie Baker from The Bob & Tom Show on local station Q106.5 will perform at 7 p.m. Saturday at The Rust Belt, 533 12th Ave., East Moline. Tickets ($25) are available here: http://www.eventbrite.com/…/donnie-baker-tickets… Donnie Baker, real name Ron Sexton, is a comedy character that is ‘trapped in the eighties’ and ‘will never admit defeat.’ With known catchphrases such as ‘I’ll say it right to your face’, ‘I swear to God’ and ‘State Law!’ Sexton plays the perfect archetype of the Kentucky redneck caricature. The character of Baker... Read More