Take A Trip Down 42nd Street With QCMG 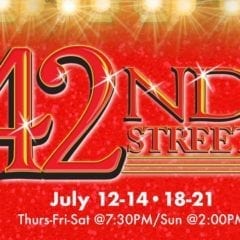 The toe-tapping American musical dance sensation, 42nd Street, is coming to the Quad Cities! Presented by Quad City Music Guild, 42nd Street will be playing at the Prospect Park Auditorium (1584 34th Avenue Moline) July 12-14 and 18-21. Thursday, Friday and Saturday shows are at 7:30 p.m. and the Sunday shows will be at 2 p.m. This 1980 Broadway production won the Tony Award for Best Musical and became a long-running hit and its 2001 Broadway revival won the Tony for Best Revival. With lyrics by Al Dubin and Johnny Mercer, and music by Harry Warren, the show follows director Julian Marsh as he... Read More