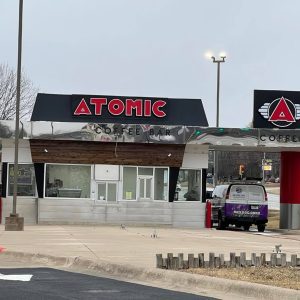 Atomic Coffee along John Deere in Rock Island is OPEN NOW! The shop had a soft opening to get things moving along smoothly over the weekend, but today, they’re good to go, open in the old Checkers along John Deere corridor. Earlier, it was reported that Atomic  would be opening in Rock Island around March, and delays pushed them into early April.   Atomic has two other locations in the Quad-Cities, 4707 N Brady St. in Davenport, and 3235 Ridge Point, Bettendorf. For more info, stay tuned to your fun, free, local QuadCities.com…  Read More

Well coffee lovers I’m back at our next stop on our Java Journey. It’s a quiet little place called Atomic coffee. Atomic coffee sprung into existence as of January 29, 2016. It’s located at 4707 Brady Street Davenport and is a small drive-thru with big flavor. The newest location that opened April 24 is located just inside the entrance of Ora at 6701 Northwest Boulevard Davenport. Brady Street is open 5 a.m. to 9 p.m. Monday through Friday and the newest one is open 6 a.m. to 8 p.m. Monday through Friday. The owner Peter tells me the name Atomic coffee came after sifting through 50 other... Read More