Solar energy is coming to the Quad Cities International Airport by late this summer. Solar panels affixed to the terminal roof and a new carport structure will provide a clean, renewable energy source for the airport, and a covered parking option for nearly 200 spots in the short-term lot – at no cost to the Moline airport. Two additional electric vehicle charging stations will be added to the existing three once the project is completed. At the time of this announcement, only 20 percent of public U.S. airports are using solar power. “We are fortunate to have this opportunity to bring a clean... Read More

The timing of the Quad Cities International Airport (QCIA) announcing its ambitious, sleek renovation plans Tuesday was no coincidence. The public unveiling of more than $20 million in passenger terminal improvements came the day before President Joe Biden today announced his ambitious $2-trillion infrastructure plans, dubbed “The American Jobs Plan” – which includes $25 billion for airport improvements nationwide. “A lot of the funds we get, we pull in federally into the community. So we’re not big on pulling taxes from our neighbors,” QCIA executive director Benjamin Leischner... Read More 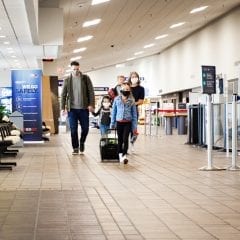 The Quad Cities International Airport in Moline will be getting a dramatic, $20-million-plus facelift. Several concepts and images were unveiled Tuesday by airport officials that include added amenities for passengers and represent the first major investment in the aging facility since 2001. The landside terminal, which includes ticketing and baggage claim, has not been updated since 1985. “The travel industry has changed dramatically since 1985 but our airport has had to take a patchwork approach to keep up,” QCIA executive director Benjamin Leischner said Tuesday. “With the work being done... Read More