Mockingbird Slates Auditions for Their Town 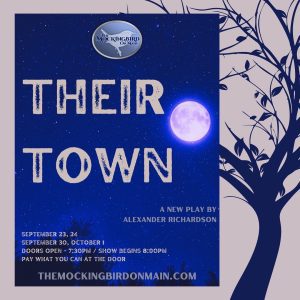 The Mockingbird on Main will hold auditions for Alexander Richardson’s Their Town on Saturday, June 25 at 11am at their venue located at 320 North Main Street in Downtown Davenport. Their Town, previously presented with an earlier draft of the script at Playcrafters Barn Theatre, concerns a small town in a fly-over state whose residents experience life, love, and death in the new century. Emily has no direction in her life. Mike is working at a failing company in a dying industry. Cierra’s ex-husband took the car and won’t give it back. Bernard can’t get the remote... Read More

Mockingbird in Davenport Returns With Modern Spin on Ibsen’s “Enemy” 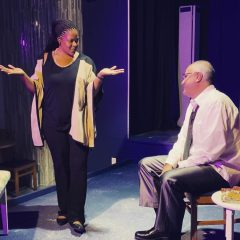 For the second fully staged production at Mockingbird on Main, 320 N. Main St., Davenport, Q-C playwright Alexander Richardson has taken a sprawling 19th-century play by Henrik Ibsen, slimmed it down and modernized it. The 27-year-old East Moliner – who’s been writing plays for almost a decade – slashed the 1882 “An Enemy of the People” from five acts and 30 characters (stretched across three hours), to just five characters and one act, across about 80 minutes. In the story, a doctor realizes that the new expansion for his town’s factory is releasing toxins into the town’s... Read More

Check Out A Work in Progress at Playcrafters Barn Theatre 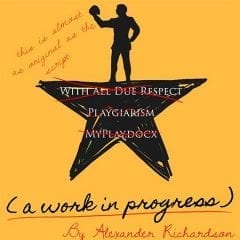 The newest production to take the stage at Playcrafters Barn Theatre is one you won’t want to miss. A Work in Progress takes the stage at Playcrafters Barn Theatre (4950 35th Avenue Moline) this Friday Jan 11 and will continue production through Sunday Jan 20. This play is rated PG-13. A failing theatre company, The New Dreadful Players, puts on one last show in an effort to save itself. The only problem is that they’ve lost their lead actress and the show opens in five days. As the week wears on, everything that could possibly go wrong– does. An original work by Quad Cities playwright, Alexander... Read More