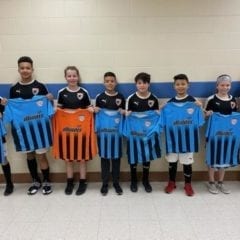 Three players from the East Moline Silvis Soccer Club U12 Spartans have made the final cut for the Illinois State Soccer Team in their age group, and seven players overall from EMSSC made the cut! Eli Nache and Jonas Cortez made the final cut for the state team for 2008, and Junior Garibay made the pool team! Other EMSSC players to make their respective teams include Deontae Nache and Austin VandeGeest, who made the 2006 team, Addi Schatteman, who made the girls 2007 team, and Logan Schaeffer, who made the 2007 team! EMSSC is the only team from the Quad-Cities to be represented on the teams! ... Read More