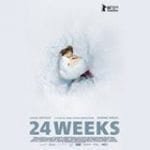 NOTE: Noted national film critic Connie Corcoran Wilson will be providing coverage of this year’s Chicago International Film Festival for QuadCities.com! Check out her reviews and features on what’s new and exciting in film debuting during the festival. The German film “24 Weeks” from Director Anne Zohra Berrached was screened in Chicago for 8 members of the press on Wednesday, October 5th. It is the story of a popular stand-up comedienne (think a German version of Amy Schumer) who finds herself pregnant by her live-in long-time love and manager, only to discover, several months into her... Read More